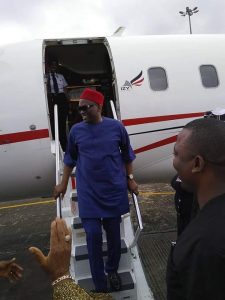 Hon. Ndudi Elumelu alighting from the aircraft at the Asaba International Airport.

BY CHUKWUDI ABIANDU
Friday, August 30, 2019 will remain remarkable for Hon. Ndudi Elumelu and his admirers, Aniocha/Oshimili constituents, well wishers and political allies. It was the day of his home coming since his election into the House of Representatives, the inauguration and since the mantle fell on him as Minority Leader in the Green Chambers.

On that day, the Asaba International Airport, in the Delta state capital rose in carnival mood. Gaily attired women in the traditional Anioma white Akwa Ocha wrappers, and others in Hollandaise wrappers, with blouses of different attractive colours to match added to the gaiety and opalescent scenery.

The men, in the different male traditional attires showcasing the masculine Anioma dressings were not left out. The drums beat uncontrollable, amid lyrical renditions that sang the praise of the political whiz kid, Ndudi Elumelu, with flutes that added colour to the music of the respective dancing troupes that literally covered the airport outside the waiting lounges.

Yet, inside, close to the tarmac were a handful crowd of leaders of the Peoples Democratic Party (PDP), from Aniocha-Oshimili Federal Constituency, who were dancing as they awaited the approach of their representative.

And in less than no time, here comes into the Asaba Air space, a white flying moderate bird, not a giant in the mould of a Boeing 737, which soon made its descent into the runway, while the tarmac officials directed the pilot to its final stop.

Then the singing and the dancing went up and became intense, as it was clear that the man they were waiting for was in the aircraft. First to disembark were the crew and followed by other members of the House of Representatives, who came in solidarity with the Minority Leader. Among them were: Hon. Darlington Nwokocha (Abia State); Hon. Jonathan Gaza (Nasarawa State); Hon. Femi Bamishe (Ekiti State); Hon. Jafaru Ribadu (Adamawa State); Hon. Banjamin B. Mzondu (Benue); Hon. Vincent Ofumelu (Oyi-Ayamelun, Anambra State); Hon. (Dr.) Richard Gbande (Katsina-Ala/Ukum/Logo, Benue) and Hon. (Dr.) Okwudili C.Ezenwankwo, Orumba North/South, Anambra State.

Then came the moment that everyone was waiting for; the man of the moment, Rt.Hon. Ndudi Elumelu, in a navy blue Senator outfit, with the Anioma red cap to match emerged from the belly of the bird. As he strolled down the stair case of the aircraft, the waiting supporters and crowd of enthusiastic constituents and admirers, rose in a frenzy of jubilation, singing the praise of the one described in a lyric as their hero.

A four to five year old little girl, dressed in the Anioma akwa ocha traditional wear was on hand to deliver to the Elumelu, a bouquet of flowers, to welcome him back home.

The ever busy journalists, of the electronics and print as well as the online media were on hand to meet with the Minority Leader, and hosted him to a barrage of questions that he handled effortlessly.
The Director General of the Ndudi Elumelu Campaign Council, Chief Anene Chigbu told the Editors of banneronlinenews.com and bannermedianetwork.blogspot.com what the huge reception was all about. He said: “It is historic. And this is in the sense that nobody gave Hon. Ndudi Elumelu a chance. And after leaving the House of Representatives, four years he returned to the National Assembly shows that he is a man of the people.

“He fought and retained the minority caucus leadership for Deltans. He is our pride and deserves our appreciation.”
Chigbu continued: “We his supporters and the crème of Deltans have come out to receive him being his first visit since his emergence as Minority Leader in the House of Representatives.”
For Chief Ikechukwu Martin Okakwu, Senior Special Assistant to Governor Ifeanyi Okowa on Political matters, the event of Friday, August 30, 2019 was necessary. It was to let Nigerians know that “we the indigenes of Aniocha-Oshimili vaue Hon. Ndudi Elumelu’s representation with very high esteem.
Okakwu said: This because since we’ve been having representatives, we’ve never had a person of his kind in terms of his charisma, one that brings valuable projects to the constituency. When he left the other time, there was obvious vacuum. And it is very rare to have a former representative called back.
“The amenities that he has brought to us cannot be quantified, including scholarship awards that he gave to the indigent. Ndudi Elumelu is a man born with the good heart. He is very humane and mixes well with all categories of persons. He does not discriminate. Even those opposed to him will enjoy him, and they will be surprised.”
A former Secretary to Aniocha Local Government Council, and now SSA to Governor Okowa on political matters Mr. Adim Elue was asked why he thought Ndudi Elumelu deserved the elabore welcome home activities put in place, he said: “It is his first home coming since his election as the Minority Leader of the House of Representatives. The people of Delta State and the entire South-South are glad to receive him. We know that he will perform. His home coming is his way of showing gratitude to the people he know it is the people that put him there. Ndudi Elumelu is a seasoned and tested politician, and who we know will perform. He did it before.”
From the airport, the convoy took off in a long procession, with the House of Reps members and Elumelu riding in a long white air-conditioned bus and headed straight for Elumelu’s country home in Onicha-Uku. As they went, he took the Honourables to projects attracted to the community and other personal community projects financed by him for the people.
At his country home, a 21-gun salute boomed to herald welcome him and his entourage, while a massive throng of party faithful, admirers and constituents were seated in the compound waiting for him.

On hand to give pep to the event were the former Deputy Governor of Delta State, Chief Benjamin Elue and the former Minister of State for Agriculture, and later Minister of aviation, Chief Chris Agbobu, among others. 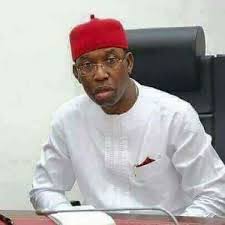