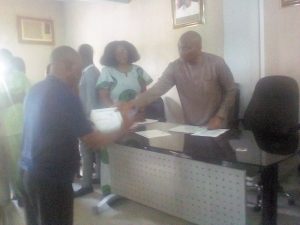 Hon. Ndudi Elumelu presents certificate to a participant of the empowerment training.

The Minority Leader of the House of Representatives, Hon. Ndudi Elumelu has said that he remains committed to alleviating poverty among his constituents in Aniocha/Oshimili Federal Constituency of Delta State.

Elumelu spoke on Friday, September 20, 2019 at the closing ceremony of the three-day entrepreneurial and enterprises development training programme sponsored by him for the people of the federal constituency. The training held through Monday 16th, 17th and 19 September at the conference hall of the Delta State Ministry of Higher Education, New Secretariat Building, Asaba, Delta State Capital.

He said that the programme is geared towards empowering the people, and in fulfillment of his campaign promises, saying that the facilities that will be given to them is to assist them in kick starting a worthwhile business life that will add value to the State and the country in general.

The federal legislator who represents Aniocha/Oshimili federal Constituency in the House of Representatives revealed that Mr. Tony Elumelu, Founder of Tony Elumelu Foundation, that is geared towards establishing young entrepreneurs in African with a yearly budget of over 100 million dollars, has graciously agreed to partner with his empowerment programme for the people of Aniocha/Oshimili Federal Constituency with the successful commencement of this first edition.

Elumelu said that the training and implementation of the programme was being organized and handled by Small and Medium Enterprises Development Agency of Nigeria (SMEDAN) and the Central Bank of Nigeria (CBN) under his sponsorship, stressing that the participants who are over 200 are entitled for a low interest loan up to N10 million.

“If you are given for instance N10 million facility to open a business, the tendency is that you open the business and you will also create employment by employing those people who will do the job, by so doing, we are adding value to the economy. This has informed why we brought this idea through SMEDAN and Central Bank,” he stated and want further to tutor the participants on secretes and principles of growing small and medium scale businesses.

“I can confidently tell you that this thing involves discipline, it involves integrity, it involves you having resilient spirit, empathy and humility.

“For Instance, humility, when you are given the facility, the only thing that can make you go beyond where you are with the facility is by being humble and appreciate where you are coming from and be able to intensify your effort towards ensuring that the money is not wasted,” he admonished.

The Minority leader pointed out that having a resilient spirit is a critical factor towards utilizing a facility that is geared towards assisting in alleviating poverty in the life of a people or a person.

He said: “Resilient spirit is to say, I can never go down, I will obviously make it. The money being given to you is to kick start your life. So by the time you have it and you have this resilient spirit, obviously what you are telling yourself is that you are unstoppable.

“As You have that spirit in you, yes the money is important, but what is more important is you as a person, to accept that you are capable of achieving what is possible within your domain and also impact in other people by creating jobs and making other people feel the fact that you have also gained some experience, given what you have learnt from this programme.”

Hon. Elumelu also spoke on empathy as a fundamental principle for growing small and medium scale businesses, saying, “what takes you far is how you feel about people around you and how you feel about the business that you have been asked to do,” even as he noted that the facility, being a long term interest loan, should not be a criteria for them to be irresponsible, warning that by so doing, they will be destroying their glorious future.

“To whom much is given, much is expected”, he cautioned, and wished the participants everything that will make them become very rich to the extent that they will be giving him money instead of he giving them.

Some of the participants in an interview, commended the sponsor, Hon. Ndudi Elumelu, for his kind gesture by putting up the programme and acknowledged that it will, indeed, help them to start a life that will be impactful.

Highlight of the closing ceremony was the official issuance of certificate of participation to the participants that cut across the four local Government areas of the Federal Constituency which included Aniocha North, Aniocha South, Oshimili North and Oshimili South.