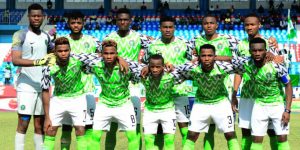 Nigeria today, Tuesday, 10/9/2019 in the bowl of the Stephen Keshi Stadium, Asaba when the Under 23 team literally spelt the name of Sudan with a five goal drubbing of the country’s team, thus qualifying for the Tokyo 20120 Olympic I, Cairo, Egypt.

In the second half, the unrelenting Nigeria boys were in their best elements as they tormented their opponents, and Sunday Faleye, a former shooting Stars player now based in Austeria consolidated Nigeria’s lead when he headed in the fourth goal.

Even as the ovation of the fourth goal was still on, Sanusi Ibrahim increased the goal tally against Sudan when he scored the fifth goal.

Coach Imanma at the post tournament press conference linked the team’s scintillating perforce in Asaba the training sessions they had. “You can see that I was in camp with most of the players. We have a pool of players; the players are Nigerians and are within the age bracket and so blessed and so we could not have borrowed players from the Super Eagles,” Imanma said.

For him, Sudan is history, saying: “We are looking forward to Cairo; Egypt here we come.”

Meanwhile, Mr. Azubike, the captain of the U-23 team attributed the team’s loss in Sudan to “ a lot of problems that I do not want to go into here. Today we played to tactics by doing exactly in accordingly to tactics,” he said.