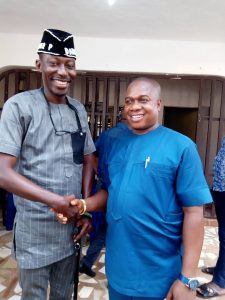 The Senior Special Assistant to the Governor of Delta State on Security, Comrade Ezekiel Daniel has said that journalists are Germaine to his effort at helping Governor Ifeanyi Arthur Okowa actualise effective security and peace in Delta, adding that the role of the media cannot be overemphasized.

He made this assertion Wednesday 23rd September, 2019, when he visited the NUJ Temporary Secretariat to seek journalists’ collaborative effort in line with the functions of his office as SSA on Security.

Ezekiel who is from Warri North and has been an activist for over 22 years, stated that he decided to connect with the media, believing that no government or its functionaries can succeed in office without the indispensable collaboration of the media.

The SSA affirmed that so far in his three weeks old appointment, he had visited some flashpoints in the state, including Onwian to hold meetings with them on the need to sustain the peace initiatives of the SMART Governor of Delta State.

He also said that he had visited Sapele Local Government Area to have on the spot assessment of the area now being largely infested by alleged Yahoo Plus criminals, maintaining that at the meeting with some youths in the area, he charged them on the need to be on the watch out for anything that impedes security and undermines peace in Sapele and Delta in general.

According to the SSA, “Since my appointment in the last three weeks, I have taken proactive steps to prove that youths are equal to effecting change in our State and country.”

“Realising that peace is the template for the desired progress and development, and upon which security and vigilance cannot be overlooked; based on this, we are deploying every legitimate means – Advocacy, Collaborative effort and others to bring about peace in our State.”

“To achieve this agenda of the Governor towards a Stronger Delta, we need the media to effectively deliver on our mandate. Thank you for opening your door to welcome us.”

Responding, the NUJ Chairman, Delta State Council, Comrade Michael Ikeogwu congratulated the SSA, adding that he had shown enough reason to succeed in the assignment the Governor appointed him for.”

“For you to realise the importance and role of the media in your assignment means you know what to do already. You must try as much as possible to diligently deliver on mandate.”

“Again, you must endeavour to harness the capacity and potentials of the youths as critical in your agenda for a secure, violent free and peaceful Delta”, Ikeogwu advised.