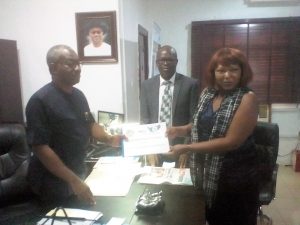 The need for government to stimulate community interest and participation in government projects has been stressed, and it formed the nucleus of a report submitted Tuesday, September 24, 2019 to the Special assistant to the Governor of Delta state on Sustainable Development Goals (SDGs), Dr. Andy Ilabor.

The report on Community engagement/participation and sustainability planning for selected projects under 2014/2015 SDGs-CGS project circle in Delta State was presented by the Executive Director, Society for Rural Women and Youth Development, Angela Onwaeze.

Onwaeze in a presentation before submitting the report said the essence of the presentation was to make visible the work of the SDGs, so that they become a referral points.

Onwaeze said: “ Presently, there is a growing evidence that under the right conditions, citizens engagement can help governments achieve improved development results, this therefore, makes engagement an imperative for openness, trust and public accountability between communities and SDGs amongst other benefits.”

According to her, the communities feel alienated when not involved in a project from inception and so, feel that they are not carried along. “One of the fallouts from previous report obtained from the field shows that communities perceived the projects as government business. Most communities did not support the project’s maintenance and its operations as they complained that they were not carried along hence the poor co-operation from them,” she said, and continued:

“It was also observed that most community development unions and local government authorities did not participate in the pre and post project implementation as they were waiting for the commissioning/handover ceremony and participation guidelines.”

Onwaeze consequently submitted that one of the objectives of the report being submitted was to ensure the implementation of a community sustainability plan that prioritises maintenance and management of the facilities, and creating an opportunity for the community to participate in the project implementation cycle.

She disclosed that while on the field collating data for the report, the project team considered inclusiveness as a strategy for engagement which offered opportunity for a wider range of participants to express their views such as women, men, youth, and representatives of Councils, community leaders and health personnel to participate in the engagement.

Accordingly and for the purpose of implementing the project, Onwaeze announced that 12 communities per senatorial district were selected for engagement across the 25 local government areas of Delta state. However, the communities bearing the SDGs’ facilities where the sustainable planning project took place are: Issele-Uku, Obomkpa, Ughoton, Cable, Odurubu, Erovie, Etua-Oligo, Egbo-Igbide, Tuomo, Otor-Udu. The rst are Okpara Inland and Ofagbe.

She also disclosed that the communities to engage were selected based on the outcome of the post project monitoring and priority needs report.

In his response to Onwaeze’s presentation, the Dr. Ilabor, senior special assistant to the governor on SDGs appreciated the Executive Director’s presentation, describing it as laudable. “We will study the report, and we see in your report the critical element of ownership of projects by communities,” Ilabor said, adding: “We need to step up to see that communities earn a project.”

He continued: “We need to establish better relationship with the Council chairmen, so they can get involved and we can hand over projects to them. “

Jerry Gana to North: Middle Belt won’t go with you if you break up...