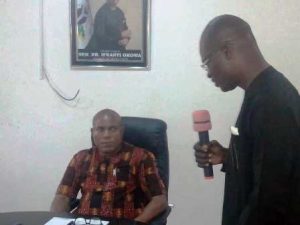 By Chukwudi Abiandu
The Senior Political Adviser to Governor Ifeanyi Okowa, Rt. Hon. Funkekeme Solomon yesterday, Wednesday, September 19, 2019, acknowledged that Team SMART for Okowa, is a reliable socio-political group in the State, with a commitment to partner with the present government.
Solomon made the statement when leaders and officials of the group paid a courtesy call on him in his office, observing that the group has demonstrated commitment to sustaining the success and achievements of the governor.
Describing the group as a focused and selfless formation that has continued to partner with the governor he said: “I am particularly pleased that you have broadened your activities to include the eradication of cultism and drug abuse in the state, which are critical components of the Stronger Delta Agenda of the State Governor.

“As a reliable support group and partner to the State Governor, His Excellency, Senator Dr. Ifeanyi Okowa, you have taken the right position by supporting the State to eradicate cultism and drug abuse as well as the renewal of the mind of the youths through your educational programmes, particularly, the Okowa free Extra Mural Lesson, which cut across the State.”
Besides, Solomon remarked that notably that Team SMART Okowa is the only group so far that has visited and did not ask for appointment, showing that it is a reliable ally in the Stronger Delta agenda of the governor.
Solomon commended the team for showing concern through their aims and objectives for the cause of education. “An educated person will not be involved in gangsterism. The Bible talks about renewal of the mind. We need to renew the moral state of our youths. In those days, the senior prefect in a school was like a lord in the school. But no more now,” he said.
He acknowledged that Team SMART for Okowa by its activities is truly a support group knowing that government alone cannot do it all. “This is very salutary,” he said, with a request that the group should remain committed and continue with its programme of free lesson, anti-cultism and the abuse of drugs.
“I will report your activities to the governor, and tell him that what you are doing is very encouraging,” he declared and thank the team for partnering with Governor Okowa’s administration.
Earlier in his address, the Director General, Team SMART for Okowa, Hon. Sunny Orishedere said that the Group which has a distinguished State Grand Patron, Elder Sam Nwa-Igunbor among the delegation was in his office to congratulate him on his new assignment as the Political Adviser to the Government of Delta State.

Orishedere said, “While we appreciate God for this assignment, we also pray God to grant you wisdom and inspiration to excel in Jesus Name. He commended him for being in the forefront of those counted with integrity, saying that he is a man that keeps to his word.

“You may recall that in 2017, we were in your office to inaugurate you as a Patron of this Group. At that ceremony you made a comment, ”Delta Central & South had the governorship slot for eight (8) years each, why then would the North not have their four more years? And not only that, you went further to state that, “not just Delta North, but Okowa”.

“Because you were committed to your words, and God seeing your heart, made you the campaign Director-General. And by the grace of God, you piloted the campaign team to victory and today, we are grateful to God,” the DG recalled and prayed that same God will lead Rt. Hon. Funkekeme Solomon and the present administration in the State to an unprecedented success and victory

Orishedere who is also the Executive Secretary, Delta State Scholarship Board further stated that the group’s aims and objectives which is showcasing activities and successes of the Governor of the State, Senator Dr. Ifeanyi Okowa is very much on course, revealing that the first publication of the Team SMART Diary, a publication of the Group, in this second tenure of this present administration in the State will be available on October 1st , 2019, saying that the latest Team SMART Diary will be the eight edition.

He also announced that the educational programme of the Group, the Okowa Free Extra Mural Lesson is still ongoing for the past three years and said that a total number of seven thousand students have passed through the programme, even as he stated that arrangements are being made to extend it to other parts of the state yet to be reached.

“We have also put in place a re-orientation programme against Drug Abuse and Cultism and many others,” He concluded and said that the group looked forward to a greater partnership with the office of the Political Adviser and the Delta State Government.

Stop the plot to rig Kwara bye-election, PDP tells Buhari, APC, cautions against use of Police