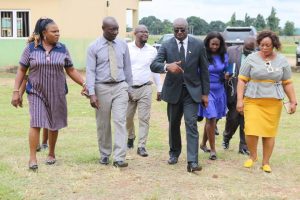 Ukah in suit during his visit to schools in Asaba.

The Delta State Commissioner for Basic and Secondary Education, Chief Patrick Ukah, has called on parents in the state to ensure that they allow their children resume immediately for the 2019/2020 academic session so that academic activities can kickstart fully.

The commissioner made the call when he monitored the resumption of schools for the 2019/2020 academic session in schools in Asaba yesterday (09/09/2019).

Chief Ukah, who decried the low turnout of students in the schools he visited, urged the students to resume as there would be a welcome back test on Thursday this week which would make up 10 Percent of their continuous assessment for the term.

At Government Model Secondary School, Asaba, the commissioner frowned at the untidy environment of the school and ordered the Principal of the school to ensure that the school is kept tidy before the end of yesterday.

He warned against illegal collection of unauthorized levies from incoming students while stating that any Principal or School Head caught would be severely punished.

The commissioner also visited Osadenis Mixed Secondary School, Asaba, where he urged the staff of the school to be committed to their duties at all times as the ministry would no longer tolerate any form of indiscipline among them.

He said as teachers, they should strive to impact positively on the lives of their students which he said would bring about fulfillment in their careers as teachers.

The commissioner charged the Principal of the school to ensure that he devised means in which he could curb indiscipline in the school.

He equally visited two newly established secondary schools located in Oduke community and FSP, Asaba where he said that the schools would start up this week.