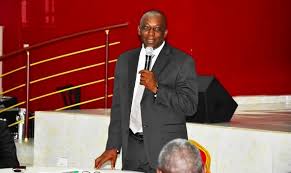 The need for youths to take caution and shun being lured to embark on trips abroad for greener pastures especially through the Sahara Desert and the Mediterranean Sea, and avoid being trapped in forced labour and sex slaves has been stressed.

Mr. Mrakpor pointed out that the high incidence of human trafficking and other forms of crime against humanity in the society has been attributed to the collapsed of high morals and respect for the dignity and sanctity of human life.

The symposium is also on the need for stakeholders to join hands with the taskforce and other relevant government agencies to create adequate awareness among youths and serving corps members in Delta State.

Mr Mrakpor who is the State Attorney-General and Commissioner for Justice, decried the lure by youths to embark on journey through the Sahara Desert and the Mediterranean Sea for “greener pasture” abroad, disclosed that over 10,000 girls from Delta State alone were trapped in Mali and other African countries engaging in forced labour and sex slaves.

While calling on the corps members and well-meaning Nigerians, NGOs, faith based organizations, traditional rulers and community leaders to join hands in fighting against human trafficking, Mr Mrakpor said that the Nigerian economic landscape provided several opportunities and potentials.

“You don’t have to travel out of the country to be successful, it is a mindset. We have a growing economy that provides lots of opportunities” the justice commissioner said.

He maintained that human trafficking was a serious crime against humanity and must be tackled head-on and counseled the corps members to join in the crusade against the scourge.

Mr Mrakpor expresses disappointment with some parents for their complexity in encouraging the illicit trade and illegal migration by selling off their landed properties to support their wards to travel out illegally.

The President of the NYSC Gender Vanguard and Charity CDS, Muonyililo Ikechukwu, expressed the preparedness of his organization to work with the taskforce in creating awareness on the dangers in human trafficking especially among serving corps members.