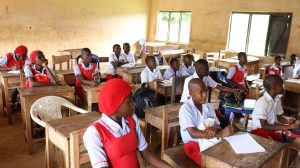 A class o students at the school on resumption.

The school was closed down following an attack by suspected Fulani herdsmen who invaded the school and kidnapped the principal and some teachers on Monday, October, 14, 2019. They were rescued same day through the efforts of the community vigilante, Police and other security agencies. 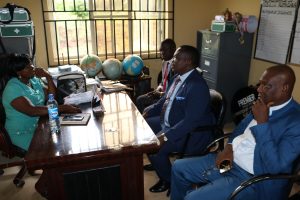 Basic and Secondary Ministry officials with the school’s principal.

Chief Ukah, who expressed happiness that academic activities have resumed in the school, thanked the traditional ruler of the community, His Royal Highness, Obi Francis Ijeh, the Police, members of the community vigilante and other stake holders for making the reopening of the school possible.

The Commissioner, represented by the Permanent Secretary in the ministry, Comrade Sam Dietake, while addressing the principal, teachers and students, assured them that adequate security arrangements have been made to ensure their safety and smooth academic calendar with the establishment of security posts around the school and regular Police patrols.

Chief Ukah told the students not allow the unfortunate attack affect their future ambitions and bright destinies and urged them to tell those that have not resumed to do so immediately.

The Principal of the school, Mrs. Onyeche Bridget Ngozi, thanked the commissioner, permanent secretary and other directors of the ministry for their show of love and concern for those injured during the attack and were hospitalized.

She said that since government has done everything possible for the reopening, they will do their best to ensure that the students meet up with the school calendar despite the number of days lost due to the closure of the school.