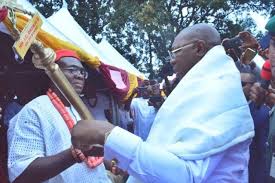 Delta Deputy Governor, Barrister Kingsley Otuaro (right) presents staff of office to the new king of Ogwashi-Uku.
The Governor of Delta State, Senator Ifeanyi Okowa, has warned that his government will not tolerate any illegal traditional stool in any part of the state and will also never dabble into the selection of traditional rulers.

Governor Okowa who gave the warning at the presentation of Staff of Office to the Obi of Ogwashi-Uku Kingdom, Aniocha South Local Government Area, HRM, Obi Ifechukwude Okonjo II.
The Governor who was represented by his deputy, Deacon Kingsley Otuaro, reiterated that government would continue to support the traditional institution through the provision of conducive environment for their leadership to thrive.

“It is my belief that this is one way that will galvanize our traditional rulers to support government policies and programmes. I therefore call on all and sundry to continue to support the efforts of this administration by contributing your quota in the sustenance of peace, unity and harmonious coexistence in the state” he stressed.

“According to the laws of the state, it is statutory for the government to present Staff of office to traditional rulers after due installation and enthronement by his people. The event is in compliance with the statute, hence it is been appreciated by Ogwashuku people.

“Obi Ifechukwude Okonjo II, was selected by the Ogwashuku king makers to succeed his father who passed on recently. Let me congratulate the royal father for emerging as the new Obi of Ogwashi-uku Kingdom. I am confident that though very big shoes to wear, you will be meticulous in using divine wisdom to handle the affairs of the Kingdom, “he added.

The governor also congratulated the people in the area for passing through the processes leading to the selection of their King just as he urged the monarch to see his elevation as a call to contribute his quota to the development of Ogwashi -Uku Kingdom through peace building.

Governor Okowa remarked further, “I also implore all the people of Ogwash-Uku Kingdom to give maximum support to His Royal Majesty to enable him create opportunities for socio-economic activities to thrive for the benefit of the kingdom, Delta State and Nigeria at large. The joy of the event today should translate into demonstrating love, understanding and cooperation for both His Majesty and the throne.”

Obi Ifechukwude Okonjo II, in his speech after receiving the staff of office, commended the Delta State government for the honour and privilege given to him to serve his people, saying the history of the kingdom dates back to over seven centuries.

“The bold steps taken by His Excellency, the Governor of Delta State, Senator Ifeanyi Okowa in presenting me this staff of office today after a careful investigative process lay to rest who rightfully should occupy the Obiship of our kingdom.

“It is our firm belief that the action taken by Your Excellency would keep to promote harmony in our kingdom. It is worthy of note that I passed through all the different stages to receive this staff of office. This includes the endorsement and presentation by the Umu Obi Obahal Royal family,” he stated.

He explained further that during his reign, he would work expeditiously to promote unity in the kingdom while pursuing education, promotion of agriculture, establishment of cottage industries, improvement on the environment, promotion of culture and infrastructure to its logical conclusion.

The chairman of Aniocha South Local Government Area, Chief Isaac Anwuzia, told the crowd of persons that graced the event that the day marked a milestone in the history of his people.

“Your Excellency, given the economic recession that greeted our Nation and state at your inception of office as the Governor of Delta State, we are surprised at the monumental achievements that your administration has recorded. It is our prayers that God will continue to give you the grace to fill the huge developmental gaps across the state.”

“I equally want to assure you that the Aniocha South traditional rulers, committee and indeed the good people of Aniocha South are willing and ready to support our brand new Obi,” the chairman stated.

Uduaghan, Oyovbaire take swipe at Utomi, accuse him of not observing intellectual rules of engagement in criticism