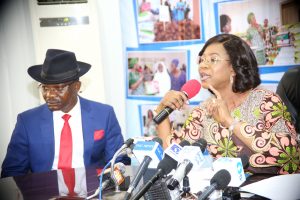 Wife of Delta state Governor, and Founder, 05 Initiative, Mrs. Edith Okowa addressing journalists in Asaba. With her is the State Commissioner for Information, Mr. Charles Aniagwu.

The wife of Governor of Delta State, and Founder 05 Initiative, Dame Edith Okowa today, Wednesday, October 2, 2019 said her Non-Governmental Organisation did not receive any money and that no Memorandum of Understanding (MoU) has been signed with any organization and no commitment has been made.

Addressing a press conference in Asaba, where she expressed gratitude to the media for giving support to the 05 Initiative in the last four years, and helping to create awareness of the programmes and activities, which has attracted national and international attention to her NGO, she spoke obviously to put the record straight about a news report that states in its headline that “Delta First Lady gets N3.5bn grant to fight sickle cell.”

The report had stated: “The Initiative for Global Development (IGD), a U.S.-based nonprofit organisation, has announced the donation of 10 million dollars (N3.5 billion) for the management of sickle cell disease (SCD) in Delta.

The Agency report had also stated that the money is coming through 05 Initiative, the pet project of Mrs Edith Okowa, wife of the state Governor.

Excerpts from the Agency report reads:“Leila Ndiaye, the Chief Executive Officer of IGD, made the announcement at a sickle cell sensitisation forum organised by 05 Initiative in New York on Thursday.

“The event, held on the sidelines of the UN General Assembly, was part of the funding and partnership drive of 05 Initiative, a nongovernmental organisation.

“Ndiaye said the money was meant for the digitisation of sickle cell centres established by 05 Initiative across the state to provide care for patients.

“According to her, the gesture was inspired by Mrs Okowa’s commitment to the fight against the disease, which is widespread in Nigeria.

“The country is said to have one of the highest incidences of the blood disorder in the world, with about 40 million carriers.”

Obviously making the issue clear, Delta First Lady said: “A major outcome of our UN presentation is the expressed desire of The Initiative for Global Development to partner with 05 Initiative. Their interest is centred on digitizing our sickle cell clinics across the state. This will generate critical data that will aid in the management of sickle cell patients. I would like to state categorically that no memorandum of understanding has been signed and no financial commitment has been made.”

Answering a Reporter’s question on whether she was given money or her organization for the project, Mrs. Okowa reiterated: “No money was given to 05 Initiative.”

Speaking on the work being done by her NGO, Dame Okowa said: “05 Initiative, as you may be aware, is a Non-Governmental Organization inspired by the teaching of our Lord Jesus Christ in Matthew 25:35-36. Our mission is to:

• Feed the hungry
• Provide shelter for the homeless
• Clothe the poor
• Care for the sick and
• Visit the prisoners.”

The prison welfare programme of 05 Initiative has seen the organization distributing free medication to the five prisons across Delta state. “We have constructed water supply systems in all the prisons, distributed toiletries to prisoners, helped to pay fines to secure the release of prisoners who were unable to pay them and have also conducted free medical outreaches for the prisoners.

“We have also focused on orphans. We house them in suitable accommodations across the state and pay tuition for some of them. Every second Monday in November is World Orphans Day, which we commemorate by distributing food and provisions to every registered orphanage in the state, thus giving these children a sense of belonging.

“Women empowerment is one of our cardinal programmes through which we financially assist indigent women. 05 Initiative has produced lock-up stores for women who desired to trade and also created opportunities for women and young girls who showed interest in acquiring a skill. Every year we provide welfare packages such as food items to 2,500 women across the three senatorial districts of the state.”

Mrs. Okowa continued: “In 2018, you may recall that we held a massive grassroots medical outreach in the state where we attended to 26,304 patients, distributed 15,811 eyeglasses, dispensed 9,380 eye drops and performed surgery on 2,241 patients. In the past four years, we have paid hospital bills for indigent patients to the tune of nearly N14million majority through our World Charity Day celebrated on the 5th of September every year.

“Perhaps our most visible achievement to date is our contribution to the treatment and management of sickle cell disorder. Towards this end, we have so far established 12 sickle cell centres in government-owned hospitals in Agbor, Oleh, Sapele, Kwale, Okpe, Ughelli, Out-Jeremi, Umunede, Issele-Uku, Patani, Eku and Koko where we have put modern laboratory equipment, genetic counselors and medical doctors to attend to these ‘warriors’ who are determined to survive in spite of all odds.

“All these activities formed part of our presentation at the just concluded United Nations General Assembly. To the glory of God, our modest efforts in tackling the sickle cell disorder caught the interest of organizations and individuals who were motivated to do same in their respective countries. This has always been our yearning; that each and every one of us will contribute our quota in order to change the world, one person at a time,” Mrs. Okowa said.