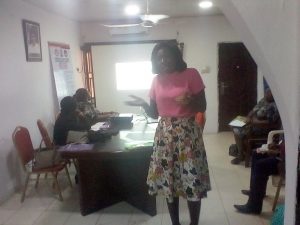 Are you a parent? Are any of your children under two years? If so, it is important and imperative that you get that child out and made available for immunization against measles, a deadly but preventable disease that afflicts infants.

This is the clarion call of health officials at a stakeholders’ meeting in Asaba today, Tuesday, October 29, 2019, on “Introduction of measles containing Vaccine 2nd Dose (MCV2) into routine immunization in Delta State.”

The event which held at the Delta State Primary Health Care Development Agency (DSPHCDA) had in attendance the Director, Planning Research and Statistics Dr. (Mrs) Gloria Patrick-Ferife who represented the Executive Consultant, Dr. Jude Winful-Orieke; the State Health Educator, Mrs. Ifeoma Popo, and Mrs Evelyn Joseph of UNICEF, among others.

Mrs. Popo who took time to talk on the importance of parents seeing value in the benefit of immunizing children against measles attacks, said although children at age nine are supposed to have had the first dose of the Measles Containing Vaccine (MCV1), but that the second dose of the exercise is about to begin and that it will cover from November 14th to November 19, 2019.

According to her, the measles vaccines MCV1 and MCV2 are both to prevent the attacks of measles on children, but that the second dose vaccination will ensure that 95 per cent of the children are completely immune, and have no trace of the disease any more.

Mrs. Popo called attention of parents to the fact that immunization is one of the critical measures to control measles and prevent it, since the disease is very dangerous as it can cause death, deafness, among others.

She said: “Measles is a highly infectious disease caused by measles virus, leading to morbidity and mortality among children under five years. 17,000 children die every year in Nigeria. Of course, measles is preventable by measles vaccine and this has led to 84 per cent reduction. The vaccine is safe, free and effective. Parents should not entertain any fear.”

She hinted that the disease is an airborne disease, and person-to-person through contact with respiratory droplets from nasal and throat secretions from infected persons.

However, the signs and symptoms, Mrs. Popo said begins 7-14 days, with high temperature, coughing, running nose, red eyes and sore throat. “Rash starts from the forehead to the body, lasting from three to four days. Children with measles should be kept away from other children until full and total recovery,” she said.

Complication of the disease is indicated by diarrhea, blindness, ear infection and pneumonia, but if not properly managed, acute cases can lead to inflammation of the brain, brain damage and death.

The disease can be prevented by vaccination with measles vaccines (MCV1); while MCV2 is to protect the population as a second dose of measles vaccine will ensure more than 95 per cent seroconversion.
Mrs. Popo said that the second dose can never be too much as it gives additional protection against measles.

Besides, she disclosed that the second dose immunization has attendant opportunities such as:
• Prevention of missed doses of other vaccines (e.g. Men A, Yellow fever vaccine, first dose of measles).
• Growth monitoring of children, administration of Vitamin A.
• Administration of deworming tablets.
• Provision of Long lasting Insecticidal Nets (LLINS).
• Assessment and referral of children with minor ailments.
• Education of care givers on family planning and its importance to the health of the family and society.
• Provision of personal and environmental hygiene through health talks and guidance.

Okowa condoles Urhobo Nation over the passing of Dafinone, Ibori pays tribute to the doyen of accountancy