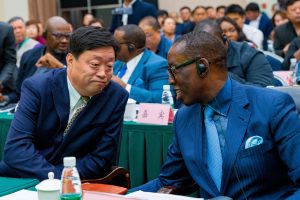 He made this known at Kwale Industrial Park Road Show in Shenyang, China.

At the event which was attended by Chinese Government officials and potential investors, Okowa outlined the vision of the state government for an aggressive industrialization agenda.

Explaining the initiative, he said “I am here personally and along with key members of the state executive council and legislators as a sign and demonstration of our commitment to this initiative.

“Nigeria is open for business and I make bold to say that Kwale Industrial Park is a compelling investment choice.

“I want to say upfront that locating in Kwale, an industrial park opens your business to Africa’s biggest market. Nigeria, and Africa as a whole, is the world’s next frontier business to benefit from that growth.

“In Delta, we are working relentlessly to make Kwale the most investor-friendly location in Nigeria. It is a peaceful community and the support and cooperation of the community is already assured.
“I can tell you that they are eagerly waiting for the park to take off.’’

On incentives, the governor affirmed that the state government was creating an intervention fund of 10 million dollars in the first instance.

According to him, this is to support investors that are able to make an early decision to set up their plants in the Kwale Industrial Park.

“The money will be utilized as a counterpart start-up equity fund from the state government to enable investors to partially de-risk their investment.

“I am confident that some of you who have existing plants will find such equity contribution helpful in kick-starting your venture into the park.

“Delta State is also looking to collaborate with the Province of Liaoning formally in a strategic partnership.

“We believe that such government-to-government partnership will be a confidence-booster for prospective investors and we assure them of the security of their investment,” he stated.

In his remarks, Nigeria’s Ambassador to China, Mr Baba Jidda, lauded the governor’s initiative, and challenged other state governors to key into initiative for the development of the nation.

“I am highly impressed by the initiative of Gov. Ifeanyi Okowa in establishing the Kwale Industrial Park.

“Our responsibility here in China is to promote investment between Nigeria and China, and Delta State Government led by the governor himself has really shown the way.

“We are highly encouraged by the initiative and I want to assure you that the Chinese investors that attended the roadshow were highly impressed.

“We at the embassy will do our very best to support the initiative as we encourage other governors to emulate this positive step,” he said.

The highpoint of the roadshow was the signing of a Memorandum of Understanding between Delta government and a Chinese agricultural company to grow and process soya bean at the Kwale park.