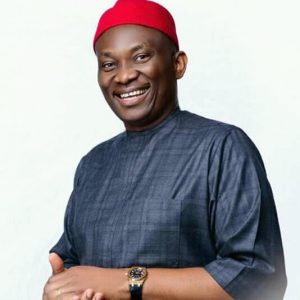 The Minority Leader of the Nigeria’s House of Representatives, Hon. Ndudi Elumelu has congratulated Nigerians on the occasion of the 59th independence anniversary of the Country.

In a statement issued from the office of the Minority Leader, House of Representatives, National Assembly Complex, Abuja, Hon Elumelu said that the country and its people have in so many ways thrived despite obvious challenges, but that God has continued to show himself strong and faithful in their affairs.

The Minority leader appreciated the people for believing in the country over the years, and expressed his firm belief in the ability and capacity of the people of the country to work in unity to surmount the challenges.

Elumelu is certain that with the blessing and love of God the country would be able to overcome her problems, and urged that Nigerians, irrespective of tribe and gender should shun every form of sentiments, divisive tendencies and come together as one indivisible entity.

The youth friendly Federal Legislator particularly called on the youths to shun anything that will question the country’s integrity as a nation, saying that youths being the future leaders of the country, should channel their mind set towards engaging in endeavours that will add value and ensure economic growth in the overall interest of the building of the nation. “God has been faithful in the affairs of Nigeria and the good people of Nigeria. It has not been easy but I believe that we are in the right direction.

“All I ask is that God should continually bestow upon us selfless leaders that are committed to our national unity, good governance, security of people and properties and above all a God fearing Leader,” He prayed, while appreciating Nigerians for choosing them to represent their interest.

“I ask for their continued support in prayers so that with the fear of God in us we shall make good laws that will promote good governance and prosperity for all citizenry,” the Minority Leader pleaded.

Call for Entries for Excellence in African Storytelling

My re-election good for regional cooperation, says Obaseki on thank you visit to Okowa