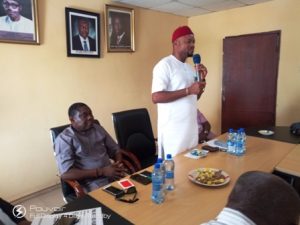 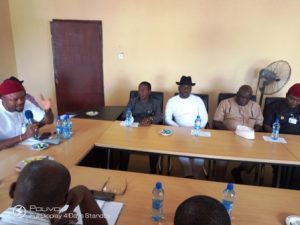 The Honourable Member representing Aniocha North Constituency at the Delta State House of Assembly and Chairman of House Committee on Works, Hon. Engr. Emeka Nwaobi has led members of his Committee on a visit to the Ministry of Works, to familiarize and solicit their working support and cooperation ahead of his over-sighting function on the Ministry.

During the visit which took place on Wednesday 23rd October, 2019, the renowned civil engineer had solicited the support of the Commissioner, as well as his administrative and professional team in the Ministry, with a view to having a robust engagement as he carries out his oversight function. 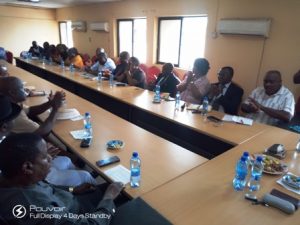 The amiable lawmaker had informed his hosts that the visit was more or else like a home coming, in the sense that being an engineer, he was coming to interact with fellow engineers with the same aspiration and goal.

Speaking further, he reeled out the aims and objectives of his Committee, which are to ensure that no more will contractors be allowed to deliver shoddy projects in Delta.

He affirmed that he was not ready to fail in the assignment, and as such needed the cooperation of all and sundry to seal the integrity of Governor Okowa in funding road projects, adding that the Governor’s impeccable commitment to ongoing road construction projects and those yet to be awarded should not be taken for granted.

According to him, “Our amiable Governor, Senator Dr. Ifeanyi Okowa has been nicknamed ‘Road Master’ because of his commitment to funding road projects. We must give him that honour by ensuring that roads awarded for construction are not only properly designed, but adequately constructed according to standard and specifications.

“As a professional engineer and Fellow of the Nigerian Society of Engineers, I am not ready to fail the Governor, the House of Assembly that has assigned this role to me and of course Deltans and the entire humanity by encouraging shoddy jobs.

“So please, let’s work together towards actualising the Governor’s dream of a Stronger Delta that we must all be proud of and history will reckon for us”, Nwaobi posited.

Responding, the Honourable Commissioner, Chief James Augoye said he was pleased and excited with the visit by Hon. Nwaobi as Chairman of the House Committee on Works with members of his Committee.

He described Nwaobi as a round peg in a round hole, maintaining that both him and his team were ready to work in synergy with such an astute and resilient professional engineer.

Augoye reported that so far, he and his team of engineers had worked in their best capacity to ensure that quality roads were constructed for the benefit of Deltans; while also pledging to continue to strive and consolidate on quality projects.

The visit was monumentally applauded by top management staff of the Ministry of Works who was in consonance with the professional capacity of Hon. Engr. Emeka Nwaobi, congratulating him for being appointed to head such a technically inclined Committee; while also eulogizing him for sustaining his professional integrity and sagacity over the years. 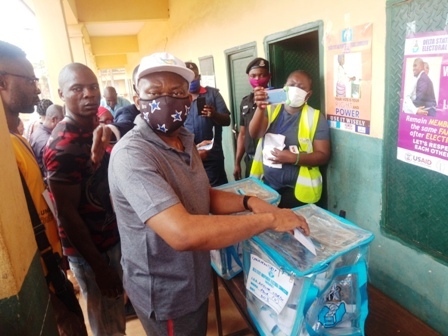