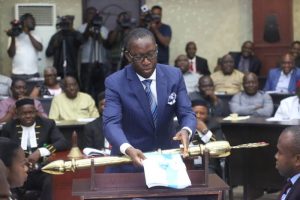 Governor Ifeanyi Okowa of Delta State has sent a N27.9 billion supplementary budget for 2019 to the State House of Assembly for approval, increasing the initial budget figure of N390 billion to N417.9 billion.

Okowa’s proposal was contained in a letter to the state house of assembly which was read by the Speaker, Chief Sheriff Oborevwori, at the plenary today, Tuesday, October 22, 2019 in Asaba.

According to the governor, the proposal for the budget review was informed by the performance of the approved 2019 budget and improvement in the revenue of the state.

He said the review was intended to adjust and realign the budgetary provisions of 2019 to accommodate commitments, priority projects and programmes of the state government which were not adequately provided for.

The Majority Leader of the house, Mr Tim Owhefere, moved a motion for the house to receive the letter from the governor and was seconded by Mr. Festus Okoh, representing Ika South.

The motion was unanimously adopted by the members and the house slated the second reading of the bill for Wednesday.

Also, the house approved the request by the governor for the state to accept United Bank for Africa PLC’s re-issued offer of N500 million revolving bank guarantee and issuance of conditional Irrevocable Standing Payment Order (ISPO) in favour of UBA PLC.

The governor’s request was also contained in a letter read by the speaker during plenary on Tuesday in Asaba.

In the letter, Okowa recalled that the state Executive Council on February 27, 2018 approved that the state should secure N600 million revolving bank guarantee in favour of Lafarge Holding in Africa PLC from a distance class deposit money bank.

He said that the bank guarantee was to facilitate the proposed construction of 10,000 housing units for civil servants in Illah, Oshimili North Local Government Area of the state.

The governor said that the bank had offered a bank guarantee which the state duly accepted.
Consequently, the house approved the request, following a motion by the majority leader which was seconded by the Deputy Majority Leader, Mr Oboro Preyor.

The house further approved another request for the validation of a bank guarantee offered by Zenith Bank PLC in respect of N200 million Federal Government share of the counterpart funds for the 2018 SDGs and CGS projects in the state.

The speaker who read the letter of request, said the office of the Senior Special Assistant to the President on SDGs had called for the submission of application to commence the 2018 Conditional Grants Scheme to the state.

The majority leader also moved a motion for the receipt of the letter for further consideration and approval and the motion, which was unanimously adopted, was seconded by Mr Austin Chikezie (PDP-Aniocha South). (NAN)

Ukah frowns at school labour before exams in Delta