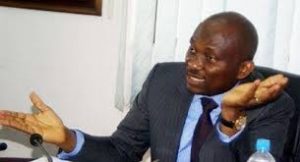 The Peoples Democratic Party (PDP)-led opposition in the House of Representatives at the weekend, picked holes in the N10.33 trillion 2020 budget, insisting that the annual estimate will be subjected to thorough legislative scrutiny to ensure that it reflects the general aspiration of over 200 million Nigerians.

Minority Leader of the House of Representatives, Hon. Ndudi Elumelu, in a statement today, Sunday, October 27, 2019 and signed by him, maintained that though the House had resolved to pass the budget before the end of the year, the details, particularly the capital expenditure items and implementation modules must meet the yearning of Nigerians before the budget is passed into law.

The Minority Leader noted that the opposition “recognizes the fact that Nigerians look up to them to protect their interest in critical issues that directly affects their lives, particularly on budget planning and implementation in key sectors.”

Consequently the opposition assures that the details of the N2.46 trillion capital budget must be dissected and adjusted accordingly to ensure that critical needs of Nigerians are adequately accommodated, as well as to plug waste and eliminate budgetary corruption at every stage.

According to the Minority Leader, “Given the sorry state of our infrastructure, the opposition must ensure that the votes earmarked by Mr. President for the rehabilitation of roads, power infrastructure, health services, agriculture, water resources, education among other critical sectors are thoroughly scrutinized to guarantee full implementation as well as reflect the federal character principle across board”.

The minority leadership frowned at reports that certain committees barred the media from covering their budget defense sessions, insisting that budget defence must be in the open and more so, transparent, so that Nigerians are fully carried along in all the processes leading to budgetary decisions in all critical sectors

The minority leadership has, therefore, directed all opposition members in various committees to ensure strict compliance with the democratic principles of transparency, accountability and prudence in the budget planning as well as in the implementation oversight of both the capital and recurrent components.

The opposition further guaranteed that it is poised to fully monitor the implementation of special intervention funds for the unemployed as well as the welfare of the Internally Displaced Persons (IDPs) in the North East and other parts of the country to ensure that the money is not diverted as witnessed in the past under a former Secretary of the Government of the Federation (SGF).

Furthermore, the minority leadership assured that the opposition will take critical look at all revenue projection from Value Added Tax (VAT) and other tax regimes so as to ensure balance, equity and fairness and guarantee that the masses are not overburdened in the process.

What Editors saw of Okowa’s strides in Delta