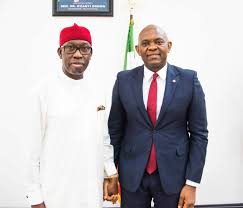 Youths of Delta origin with eyes for entrepreneurship are in for a big deal as they now have opportunity to be trained on how to convert ideas into business.

Besides, they will also learn how to develop business plan and be exposed to places to source for fund.

This commitment came from participants of Tony Elumelu Foundation of Delta State origin who paid a courtesy call on the Governor in Asaba, Delta state capital.

Coordinator of the group, Mr Samuel Erubare said that the group has come to collaborate with the state government and key into the Stronger Delta agenda.

“We want to partner with the Job Creation Office to train entrepreneurs and teach them how to convert ideas into business, teach them how to develop business plan and also expose them to little places to source for fund.

“We also want to partner with the state government to organise Delta Economic Summit as a road map which is deeper than the ones organised before now” Mr Erubare said.

Welcoming the group on behalf of the state government, the Chief of Staff, Government House, Olorogun Davis Edevbie reiterated government’s commitment to providing the enabling environment for private investors to thrive.
Edevbie said, “Government will act as catalyst to the private sector by providing the enabling environment to allow investors to do what they want to do.

“Government doesn’t want to be the driver, we don’t have the resources, there are too many competing needs competing with far little resources.

“Government can only be the enabler by providing the environment for bright and intelligent people to thrive, with the underpinning that, in everything we do, how can we help, assist and what thing government can do to allow investors to take off and fly,” he said.

The state government which expressed its appreciation to the 33 youths from Delta, who were among the 3,006 successful candidates from Africa out of the 216, 000 who applied for the programme, stated that most time, those who come to government always come to ask for what the government can do for them, but the group has come to seek collaboration with the government on how to move the state forward.

“For the country to move forward, it has to rely on the youths, to take it up. That you are offering how to write business plan from concept base to actualization stage is commendable,” the Chief of Staff said.

He promised that government will work with the youths individually or as a group to promote investment in the state.

On his part, the Chief Job Creation Officer, Prof. Eric Eboh, said that the state will collaborate with the group by engaging them as trainer in the state government various job creation programmes having gotten both global and international exposure to business entrepreneurship.