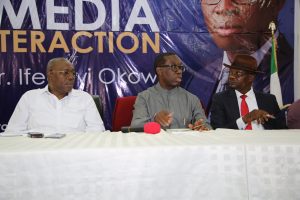 Governor Ifeanyi Okowa of Delta today, Tuesday, October 8, 2019 said the state government was accelerating completion of the Ughelli-Asaba dual carriageway to accommodate expected heavy traffic from Warri Port when dredging of second part of Escravos bar would be completed.

The governor made this known at his quarterly interactive session with newsmen in Asaba, and said that the Federal Government was undertaking the dredging of the Warri Port stretch.

According to him, my administration is working round the clock to complete the dualisation of Ughelli-Asaba Road because of its importance in the evacuation of goods from the port.

He said that in May, 2015, there were some projects that his government chose as priority and that one of them was the Ughelli-Asaba road.

He explained that the previous administration had nearly completed Section B of the project, which was divided into three phases, adding that section C, from Ossissa to Asaba, which was the area slowing down the completion of the project would be concluded between November, 2019 and April, 2020.

“Work has started earnestly at the Section C that is Asaba/Ogwashi-Uku/Ossissa road. All these work are being done because these roads are very critical to us.

“It is going to ease movement between Warri and Ughelli, through Asaba to Onitsha and now that our ports are gradually coming back to life and we are hoping that when the Federal Government through Nigeria Ports Authority dredges the second part of the Escravos bar, we will have many more ships coming into Delta.

“This will help to decongest the Lagos Ports and the working of the roads will come to the rescue of those who make use of the roads for conveying of goods and services,” Okowa said.
He disclosed that his administration was committed to ensuring that the 2019 budget got 95 per cent performance.

He said: “We are working hard to ensure that we present the 2020 Appropriation Bill not later than the first week of November.

“We are working with the House of Assembly to ensure that we have a budget that is transparent and will be uploaded online because, we want a budget that the people will be able to see, ask questions on and can trust.

“What we are trying to do is to have a budget that will be able to have a near 100 per cent achievement or achieve at least 95 per cent performance.

“We have also introduced the Ministry of Technical Education, and that is because of the emphasis we are laying on technical education; we want our children not only to acquire the knowledge of books, but they should be able to use their hands and their brains to work.

“We have always paid special attention to technical education; during our first tenure, through the legislation, we created the Board for Technical and Vocational Education but now that we are laying further emphasis on this, we have created the Ministry.

“This is so, especially when we have made a promise to our people that every local government will have at least one technical college; we have only six at the moment which means that we need 19 more.

On sports, Okowa stated that the State performed another feat by winning the last edition of National Youths Games held recently, adding that the five-year old competition had been won the five times consecutively by the state.

“This is a feat I believe will stay consistent; we will continue to encourage sports in our primary and secondary schools.

“You will recall that in early parts of the year we had a school sports festival for primary and secondary school children and that is where my love is, to have the ability to catch them young and to ensure that talents are not lost.

“We are looking forward to going to Edo State next year to bring back the trophy during the National Sports Festival.

“Our athletes are working very hard to win the competition again; so, I want to use this opportunity to congratulate the state’s Sports Commission and our children for being able to do us proud,” he said.