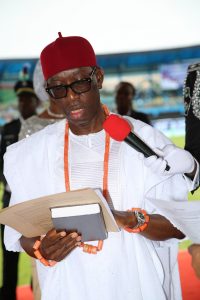 Delta Governor, Sen. (Dr) Ifeanyi Okowa, has commended the Judiciary for the “sound judgment” by the Court of Appeal, which affirmed his victory in the March 9, 2019 Governorship election in the state.

His main opponent in the polls, Chief Great Ogboru of All Progressives Congress (APC), had approached the appellate court to upturn the decision of the Election Petitions Tribunal which dismissed his petition against Okowa’s victory.

The court on Friday in Abuja, endorsed the verdict of the tribunal and dismissed the appeal in its entirety for lacking merit.

In a statement by his Chief Press Secretary, Mr Olisa Ifeajika, on Friday in Asaba, the governor thanked the judiciary for the verdict and appreciated Deltans for their dogged support.

He said that the victory was an affirmation of the popular votes given to him by Deltans at the polls.

The governor expressed reservations on the needless petition, because, according to him, the election was won and lost at the polls.

He also lauded his legal team and all those who contributed to the victory at the two levels of the judiciary so far.

He assured Deltans that his administration would continue to build on its successes.

“Let me congratulate Deltans and our great party, the Peoples Democratic Party, for this great victory.

“This judgment is victory for democracy because, the Judiciary has always proven that they are just and always committed to the course of justice and equity.

“It is also a confirmation of the popular votes given to us by the majority of Deltans who voted in that election.

“Our administration will remain committed to the development of our dear state in spite of the litany of court distractions from a needless electoral dispute.

“Let us continue to pray for our dear state and our country because we believe that your prayers have continued to pave the way for our serial victories and achievements.

“Let us continue to have trust in the Lord, our God, to be with us in the time of our needs so that we will continue to remain peaceful and united as we strive to build a Stronger Delta of our dream,” Okowa said.

The five Justices who sat at the Appeal Court and led by Justice Uzo Ndukwe-Anyanwu declared Okowa as duly elected governor of the state.

In a unanimous judgment delivered by Justice Habeeb Abiru, the appellate court upheld the judgment of the tribunal which dismissed Ignore’s petition for lacking in merit.

The court aligned with the tribunal judgment which had on Sept. 20, 2019, ruled that the APC candidate could not prove his allegations of over-voting and other electoral irregularities leveled against Gov. Okowa, Independent National Electoral Commission (INEC) and PDP at the poll.