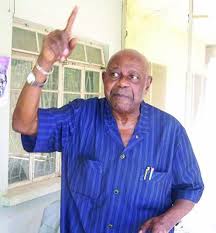 Prof Tam David-West, a former minister of Petroleum is dead.
He died at a private suite at the University College Hospital (UCH), Ibadan, around 11:00 am today, Monday, November 11, 2019.

Family sources informed that the former minister had been ill for about 11 days and was hospitalised at the private suite of the hospital where he had been receiving treatment before his death.

He was also a consultant virologist and senior lecturer at the University of Ibadan in 1969.
Meanwhile, President Muhammadu Buhari has expressed deep sorrow at the passage of his ally and friend, a man he usually called “the indomitable Tam David-West.”

The President’s condolence message was conveyed in a statement by his Special Adviser on Media and Publicity, Mr Femi Adesina, in Abuja today, Monday, November 11, 2019.

President Buhari said of the academic, author of many books and social critic: “He had an indomitable spirit, stood resolutely by whatever he believed in, and was in a class of his own.”

He commiserated with the David-West’s family, the people of Buguma, Kalabari Kingdom of Rivers State, the academia, and all those who loved “the forthright Tam David-West.”

The President prayed that God would rest the soul of the committed nationalist, urging all those who believed in the ideals he espoused to approximate same for the betterment of Nigeria and humanity in general.

Tam Tamunoemi Solaris served as Commissioner of Education in the old Rivers State, Minister of Petroleum and Energy under the Muhammadu Buhari military regime, and Minister of Mines, Power and Steel under Gen. Ibrahim Babangida regime.

Esiso to APC: Don’t politicise honour given to MKO, berates Oshiomhole for comment on...

Fulanisation Of Nigeria And Perfidy Of The British (Parts 1 & 2)