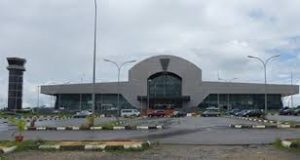 The aircraft, marked SN-AIS touched down the airports runway at exactly 4.25 p.m. operated by Captain Ibrahim Mamman who described the landing experience as “okay and very comfortable. So far, so good,” he said, adding that “This is airport is one of the best airports in the country.”

In the flight was the Managing Director of the Azman Air, Dr. faisal Abdulmunaf, accompanied and the Chief Policy Adviser to the Governor of Delta state, Prof. Sylvester Monye.

Abdilmunaf expressed delight at the commencement of operations in Delta, saying four flights a week to and from Asaba would be on Abuja route while two flights a week would be via the Lagos route.

According to him, the airline has aircraft that with capacity for 148, 124 and 110 passengers at a time. He was later conducted round the airport facilities, an experience he said he greatly appreciated.

Commissioner for Information, Mr Charles Aniagwu, described the AZMAN flight, which heralds the commencement of official use of Asaba airport by the airline as one of the payoffs from the development efforts of Governor Ifeanyi Okowa.

He said with the new airline coming on board and prospects for others to join increase the flight options to and from Asaba, the investment by the governor in upgrading facilities in the airport was well made.

Prof. Monye who said he appreciated the Managing Director of Azman Air, Dr. Abdulmunaf for the prompt way he went about getting the aircraft to commence its flight operations, saying: “We spoke about two weeks and he called me to say they were coming to Asaba.”

2019: Okowa urges Oshiomole, politicians, parties to be cautious in utterances, clarifies stand on...