Wives of monarchs in Delta state have been told to forth their good natures by being positive change agents in the kingdoms where their husbands are royal fathers.

This was the kernel of the messages delivered today, Thursday, December 05, 2019 at an end of the year get together with wives of traditional rulers at the Unity Hall, Government House, Asaba organized by Dame Edith Okowa, wife of the governor of Delta state.

She decried a situation where women as mothers have abandoned their roles as home makers and look away from their responsibilities of raising good children.

Mrs. Okowa urged them to use their special positions as wives of royal fathers to be good influence on their husbands by affecting their people and community positively.

“The word for the season is that we are wearing crowns not because we are beautiful but because the word said woman was created to be a help meet. Be the Deborah of our time in the kingdoms where your husband is the king.

Mrs. Okowa said: “God is saying every woman has a dirty to perform for God. The assignment of God is for us to see that our husbands succeed in their assignments. Whether as queens, commissioner’s wife or house wife, we are to manifest as agents of goodness and take responsibility for the upbringing of children.”

She said as responsible women, women should not be like Jezebel. The Lord is saying women return to your to your first love. We are now in a situation where our young boys are doing what cannot be said or written in print. And some mothers are supporting rather than rebuking the children of what they are doing.

Mrs. Okowa noted that the only right way is the way of Jesus Christ. “When you get Jesus you will be contented,” she said.

Member representing Ethiope West in the State house of assembly, Mrs. Eriatake Ibori –Suenu told the royal mothers and mothers in general to live up to expectation and take seriously their responsibilities as mothers in the homes.

Decrying the situation where mothers encourage their children to do yahoo-yahoo, she said as royal mothers, queens, and mothers, we should stand firm to chase away vices engaged in by yahoo-yahoo boys.
“It has gotten that bad where mothers are encouraging their children to go into yahoo-yahoo. Get back home and tell the royal fathers that enough is enough. Any child that is riding expensive car without a visible means of livelihood should be questioned to explain how he came by the money to by that type of car,” Hon. Ibori –Suenu said.

Barrister Kesiena Samson in her exhortation charged the royal mothers, who came from across the state to be like Queen Esther in the Bible by enthroning Christ in their life and community.
Taking her bearing from Esther 2: 15, she urged them understand that the reason for their position at this time was to ensure that evil is defeated with righteous.
A drama sketch was held to drive home the point made about the need for royal mothers to help their husbands achieve peace and prosperity in their kingdoms.
Queen Patricia Sido, wife of the Uvwie monarch in a vote of thanks on behalf of other royal mothers appreciated Mrs. Okowa for taking care and interest in them. 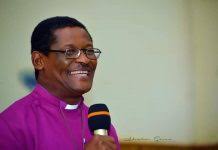