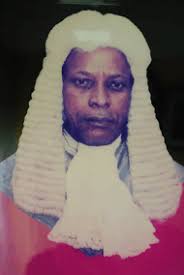 The Chief Judge of Delta State, Justice Marshal Umukoro has challenged corporate bodies in Delta and Edo States, especially the Benin Electricity Distribution Company (BEDC) to connect the Ogwashi-Uku Custodial Centre of the Nigerian Correctional Service to the National Grid for electricity supply.

Justice Umukoro made the call at Ogwashi-Uku while responding to request by the officer in charge of the Medium Security Custodial Centre, Frank Okonkwo where the Chief Judge rounded off the 2019 Judge’s Jail Delivery visit yesterday.

While tasking the Company in charge of the two Niger Delta states to live up to their corporate social responsibility to Correctional facilities in the area by hooking the facility to the national grid, the Chief Judge stated: ” It is not every time our business entities will look for profit. The profit derivable from here if they have light and properly taken care of, and they are released could not be quantified in naira and kobo.”

The Chief Judge who disclosed that out of the total number of 2,149 warrant of inmates reviewed in the five Custodial Centres across the state, 136 regained their freedom, even as he used the auspicious occasion to admonished state counsel to reside at their stations to conduct their cases rather than staying in Asaba.

The number one Judicial Officer attributed challenges of delay in court proceedings and incessant adjournments to lack of preparedness of state counsel, prosecution, and availability of witnesses and members of the Bar.

The Deputy Controller of corrections, Ogwashi-Uku Custodial Centre, Frank Okonkwo had in a welcome address thanked the State Governor, Senator (Dr.) Ifeanyi Okowa and the Chief Judge for refurbishing dilapidated vehicles, which has improved logistics in quick production of awaiting trial inmates to court.

Okonkwo who put the total figure of both convicts and awaiting trial inmates to 806 in Ogwashi-Uku Custodial Centre, as against its 160 original capacity, appealed to the Chief Judge to use his good office to influence the state government to connect the Centre to the national electricity grid.

I’m proud to be a Christian, Nwaoboshi poop-poohs traducers for playing religious, incarceration cards against him