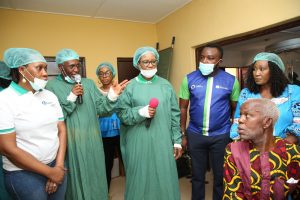 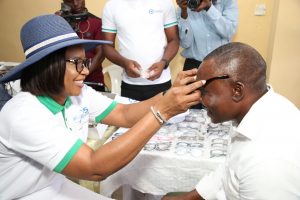 The need for corporate bodies and wealthy individuals to give back to their communities through humanitarian services has been stressed.

She commended the Management of Fidelity Bank for the huge medicare as part of their Corporate Social Responsibility (CSR) to Deltans, urging all political office holders to embark on personal CSRs to people within their immediate environments. “The greatest way to impact on somebody is by helping just as our O5 motto states, changing our world, one person at a time”.

She implored all to show love to one another in this Christmas season and frowned at those celebrating for the wrong reasons enjoining them to give their lives to Jesus Christ who gives perfect peace and who is also the reason for the season.

While challenging other Banks and corporate institutions in the state to emulate the gesture of Fidelity Bank, Okowa thanked organizations that have been giving back to the various communities in Delta.

She called on indigenes of Ika North East and South Local Government Areas to turn up in their numbers for the free medical exercise noting that Fidelity Bank was fully prepared for the outreach.

Earlier, the MD/CEO, Fidelity Bank Plc, Mr Nnamdi Okonkwo said that the Free Medical Outreach at Owa-Oyibu is in fulfillment of the objectives of the bank’s CSR philosophy, which focuses on the environment, education, health and social welfare, adding that as a bank, they believe that being socially responsible is the most effective way to bring about change in any society. “Taking responsibility is indeed the only way that lives can be touched and enriched in Nigeria today,” Okonkwo said.

Represented by the Regional Head, Mid-West 2, Mrs Augusta Anyanwu, the MD commended the Delta First Lady for deeply impacting lives under her foundation, O5 Initiative, saying, “Dame Edith Okowa stands out as one of the very few who does matchless humanitarian works across the States of the Federation. We chose to collaborate with her for this reason in our all-inclusive bottom-up CSR, the Fidelity Helping Hands Programme (FHHP)”.

Also speaking, Mr Chris Nnakwe, Head, CSR Fidelity Bank said that the act of Corporate Social Responsibility is institutionalized in the bank, announcing that the bank has concluded plans to undertake the treatment of a girl who lost to her sight two years ago.

The Commissioner for Health, Dr Mordi Ononye, represented by the Senior Special Assistant to the Governor Okowa, Dr Patrick Onwachei, commended Fidelity Bank for collaborating with the Delta First Lady’s O5 Initiative to advance healthcare. He also called on Deltans to avail themselves of the opportunity provided by the Bank.

One of the beneficiaries, Mama Maria Etunim who hails from Idumuesah community expressed happiness for the free medical outreach and commended Fidelity Bank.

The 75 years old who underwent eye surgery, disclosed that her eyes had gone blind for the past seven years. “I have been to so many places but no way. I have gone to so many hospitals and churches but no positive result. I am happy for this Fidelity programme”.

Highpoints of the flag-off ceremony was the symbolic presentation of medicated eye glasses to patients, breast and cervical cancer screening and tour of the surgery ward where four eye surgeries had been successfully completed.