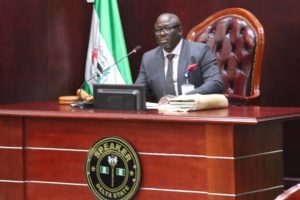 The Speaker, Delta State House of Assembly, Rt. Hon. Sheriff Oborevwori is under fire over claims that he is leading a House that is making a law that is anti-people, fraudulent and self-serving.

A group that calls itself Coalition of Progressive Political Parties in South-South which made the claim in a statement called for the impeachment of Oborevwori over the Delta State Governor and Deputy Governor Pension Rights and other Benefits Amendment Bill that seeks to make former acting governor, Prince Sam Obi a substantive governor.

It is quite unfortunate that RT Hon. Sheriff Oborevwori, Speaker of DTHA could allowed such criminal syphoning, broad daylight robbery of the State treasury and rape of the people’s commonwealth by the Executive under his leadership of the house to take place and even went as far as giving it legislative backing. How can he condescend to the level of passing a law that is anti-people, fraudulent & self-serving because of his personal ambition of 2023? By virtue of the Delta State Governor and Deputy Governor Pension Rights and Other Benefits Amendment Bill, the Speaker has succeeded in making Prince Sam Obi a substantive Governor, thereby short-changing the people of Delta South senatorial zone and as well shutting the door against the people of Delta Central the opportunity of producing the Governor of the state by 2023. The speaker shamelessly chaired the Committee of the Whole, scrutinized the report on the bill by the joint committees on Rules, Business, Legal and Judicial Matters, to make provision in the pension law for the former acting Governor to be receiving pension as *substantive and elected* Governor despite holding the office for less than two months. This is wickedness against the generality of Deltans, eyeservice and hypocrisy taken too far just to please the Governor because of his personal ambition of 2023.

The said bill is not only unpopular with the majority of the people of Delta State but that same is an embarrassment to the entire people of the State and waste of tax payers money especially when a State like Zamfara has seen the light that bogus retirement for public officers
are not in the interest of the society considering the fact that our economy is dwindling.

In our next door neighbouring Anambra State, Mr Peter Obi their Former Governor was Impeached for gross Misconduct by the State House of ASSEMBLY, his deputy then, Virgy Etiaba took over as Acting Governor from November 2006 to February 2007 (3-4 months). Till date, she only enjoys the privileges of a Former Deputy Governor and not a Governor. The Anambra State House Of Assembly could have amended their pension law for her to receive full fledged benefits of a substantive Governor but they refused because they know such amendment is self-serving and wickedness against the people they are representing. Secondly, they are not stooges and rubber stamps representative of their constituents in the hand of the executive.

We therefore calls for the immediate impeachment of the Speaker and suspension of the Majority Leader of the Assembly who sold the future of children unborn because of crumbs and contracts. we will have no choice than to use both. How can a man place his personal interest above that of the entire state constituencies? This singular act of the House under his leadership has the capability of throwing the state into chaos of unimaginable proportion in 2023. The Assembly under his leadership has so many Court cases because he turned himself and the House to a stooge and rubber stamp of the executive for the sake of crumbs. This Assembly is shameless and the worst in the history of Delta State. We are going to drag most of them to the Anti-graft agencies by January over the issue of their constituency projects they are selling up and down to contractors.

PERSPECTIVE – When justice flees the judiciary, the country dies a little