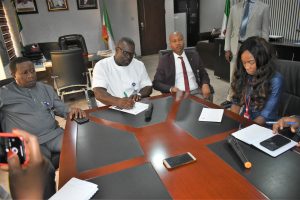 The Delta State Government has been called upon to step up effort to tackle sanitation problems in the state.

Ms Ijeoma Oforka, project lead of a civil society organization in Nigeria, Connected Development (CODE) made the call in a statement issued today, Wednesday, December 12, 2019 in which she asked that the state’s sanitation problem should be critically tackled because of the dire impact on public health.

Full text of the statement reads:

Months after Governor, Ifeanyi Okowa of Delta State inaugurated the Steering Committee for the Water Supply, Sanitation & Hygiene and passed the State WASH bill to law, the State WASH System has recorded slow progress in implementing policies that will ensure the consistent provision of clean and safe water and improve sanitation facilities for its residents.

During a courtesy call to the State House of Assembly a leading civil society organisation in Nigeria, Connected Development [CODE], with support from the USAID-Effective Water, Sanitation and Hygiene Services Program, appealed to the policy makers to eradicate bottlenecks and fast-track the implementation of the WASH policies, as this is an avenue to build the trust of citizens in public services and government institutions.

The Deputy Speaker of the State House of Assembly, Hon. Ochor Chris Ochor who received CODE delegates, led by the project lead, Ijeoma Oforka, acknowledged the gaps in the State WASH structure and the importance of fast tracking the implementation of the policies- an act that will ultimately improve the quality of life in Delta State, he added.
At a meeting with the State Commissioner of Water Resources, Barr. Martin Okonta, he noted that the State Ministry of Water Resources has a target to supply 10 urban local governments with consistent potable water to the tune of 93%. Barr Okonta also added that the Asaba Water Scheme plans to extend water pipelines to all local governments so more households can access clean water.

The GM Delta State Water Corporation, Engr. Okoh Nosa, says the Corporation will be training residents on metering and connections, installation of software in the zones to mitigate difficulties in recharging the metering cards. He also identified funding constraints as an impediment to treating water tanks and plants.

According to Ms. Oforka, the sanitation problems in the State have to be critically tackled because of the dire impact on public health. CODE called for greater action by WASH policy makers and influencers in driving behavioural change and urged private sectors to provide sanitation facilities in public spaces as a measure to mitigate the issue of open defecation in Delta State.

CODE is currently collaborating with community-based organisations, State Media Organizations, the WASH Customer Forums and other WASH groups in Delta State to support civic advocacy, and strengthen policy, as well as institutional and regulatory frameworks for improved WASH services in the State.

Delta gets testing centre for COVID-19

We are consolidating peace in Delta State, says Okowa