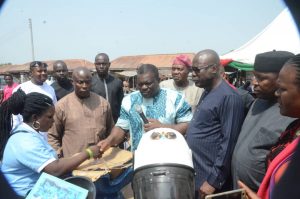 Ochor presents an item to a recipient.

Recipients of empowerment materials to engage in self employment have been told not to sell them but put them to good and profitable use.

This was the admonition of the Deputy Speaker of Delta state House of Assembly, Rt. Hon. Ochor Christopher Ochor, (Ukwuani) and his colleague, Hon. Charles Emetulu (Ndokwa West) today, December 28, 2019, at Umutu, Ukwuani Local Government on the occasion of giving starter parks to members of Delta Queens to enable them become gainfully engaged in profitable businesses of their own. 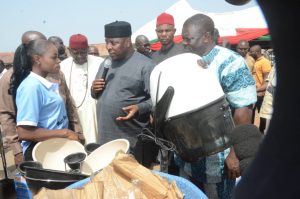 The event organized by the Occhor Ochor Foundation and co-sponsored by Dr. Ossai Samuel, a commissioner representing Ndokwa ethnic nationality in the Board of the Delta State Oil Producing And Development Commission (DESOPADEC) had a total of 22 beneficiaries each of who received various items such as sewing machines, generating sets , hair dressing equipment among others. 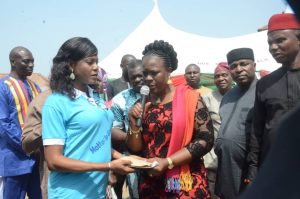 Mrs. Ochor Ochor makes a cash presentation to a recipient.

Speaking in his capacity as the occasion’s chairman, Hon. Emetulu while appreciating the gesture of giving out the items to the beneficiaries in the spirit of the Christmas season, commended Ochor Ochor for remembering to come home to appreciate the Delta Queens for their support to Ochor Ochor.

Calling on the beneficiaries not to sell the items they are being given, Emetulu Said: “I want to beg Delta Queens not to sell them, but put them to use and be useful to themselves and society.” He also commended Dr. Ossai Samuel, co-sponsor of the event for being, and praised the spirit of unity and co-operation at work between Ochor Ochor and Dr. Ossai Samuel.

Speaking at the very well attended event, Ochor thanked the people for the huge turnout event at a very short notice. He said: “I deliberately insisted that this event should start exclusively with the Ochor Foundation. This is the first phase of the empowerment programme, and we are saying that we are grateful. In the next three months, there shall be phase II, phase III and so it shall continue even up to phase 15.” 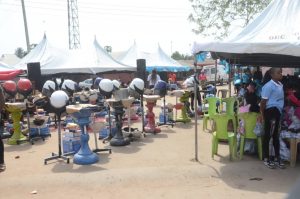 Some of the items for presentation.

To Delta Queens, he said: “These things that you are given, if you don’t use them well the world will laugh at you. Reality youth and Ochor Ochor ladies, it shall come to your turn.”

Answering questions from journalists on why the emphasis is on the female groups, Delta Queens, Ochor Ladies, Ochor called attention to the Reality Group that is made up of men and women. He said: “Today is only for Delta Queens. We shall continue with the next three phases with the women, thereafter, we will kick off with the men.”

Also fielding questions from journalists on why he is co-sponsoring the empowerment programme, Dr. Ossai Samuel spoke glowingly of Ochor, saying: “Ochor has been my leader, and I have learnt a lot from him. I just thought that I should be involved in whatsoever that he is doing. He is a true grassroots leader.”

A recipient, Miss Ossai Ashiedu, who received a sewing machine among other items, commended Hon. Ochor for the gesture. With her excited mother by her side, she said: “It is a good thing. Thanks to Hon. Ochor Ochor. God bless him. I trained as a seamstress at Obiaruku, but I never had money to by my work tools to start off. Now I have.”

Live up to demand of your offices, Esiso urges PDP youth leaders

Aniocha North Council still on the boil, Legislators pass vote of no confidence on...