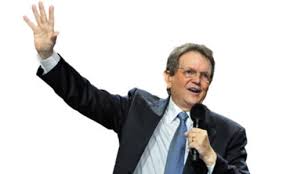 Delta Governor, Dr. Ifeanyi Okowa, has expressed sadness on the passing of renowned Evangelist, Reinhard Bonnke, who passed on to glory Dec. 7 at 79.

Bonnke was founder of Chirst for all Nations (CfaN) and has preached the gospel in parts of Delta and other cities in Nigeria and was reputed to have led over 77 million people to Christ in his over 60 years in envangelical ministry.

In a statement by his Chief Press Secretary, Mr Olisa Ifeajika, on today in Asaba, the governor said Evangelist Bonnke will be sincerely missed by those whose lives he impacted on with his over 60 years of evangelism in Africa, America and other parts of the world.

He expressed appreciation to the late Bonnke for being a role model to many preachers in Africa and urged other religious leaders to emulate the sacrifice and commitment to the people of Africa as exemplified by the late Evangelist.

“The news of the passing of Evangelist Reinhard Bonnke came to me as a shock but I am consoled by the fact that his was a life of great impact and abiding accomplishments.

“He was an incredible preacher of the gospel of Christ and I commend him for his contributions to the growth of evangelism in Africa and beyond.

“He will be sorely missed by those whose lives he impacted greatly in his over 60 years in evangelical ministry.

“On behalf of the government and people of Delta, I express my profound condolences to his wife, Annie; his children – Kai-Uwe, Gabrielle, Susie – and grandchildren as well as all members of Christ for all Nations (CfaN).

“It is my prayer that God will grant the family and all those who mourn him the fortitude to bear the irreparable loss.” he said.

Oyedepo to politicians: Get out of the place if you can’t stand for God