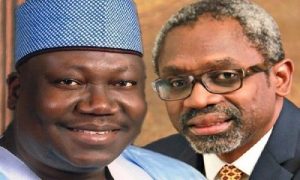 By Idowu Akinlotan
During his end of year empowerment programme for his constituents in Surulere, Lagos, Speaker Femi Gbajabiamila appeared to speak tongue in cheek when he gave impetus to the popular impression that the 9th National Assembly had become a rubber stamp for the executive. Reports of the empowerment programme were not detailed enough to determine whether anyone had asked him what he thought of the allegation of ineffectiveness levelled against the 9th NASS, or whether he simply thought aloud, imagining that the allegation was widespread and worrisome enough to attract his view. So he probably spoke tongue in cheek; but to many critics it was either a gaffe or a Freudian slip.

“People, critics and members of other parties have said the 9th Assembly is a rubber stamp of the executive,” groaned Hon Gbajabiamila. “They may have told you that, too. You know what? It is better to be a rubber stamp and bring progress, than fight the executive without progress. When two elephants fight, the grass suffers. The fact is that the National Assembly is not a rubber stamp. This is a National Assembly that represents the interests of the people .The people of Surulere did not elect me to fight the executive, but to engage and collaborate with stakeholders to bring the dividends of democracy. This is a new dispensation. There will be checks and balances. There will be separation of powers. We will agree with the executive if we have to and we will disagree if we have to. Our watchword is to protect the interests of the Nigerian people. That is the oath that my colleagues and I swore to.”

The 9th NASS is about six months old. In that period, it has been dogged by accusations of ineffectiveness and deliberate subsumption and subordination to the executive. There is hardly any month that Senate President Ahmed Lawan himself has not responded to accusation of presiding over a rubber-stamp assembly. He has defended himself as robustly as he can manage, but it must be clear to even him that he has not been successful. And despite whatever feats the 9th NASS might accomplish in the future, it is doubtful whether they will not continue to be regarded as a rubber-stamp assembly.

In fact his recent statements that whatever came from the president by way of bills would be deemed good and lawful, and that the $29.6bn loan desired by the executive would be approved even before debate, lend credence to the allegations of the 9th NASS being a weak and soulless assembly.
Obviously, Sen Lawan and Hon Gbajabiamila think critics are wrong to dismissively characterise the 9th NASS as soulless, and both legislators also unwisely equate robust oversight functions with conflict and obduracy. But Sen Lawan has made a poor job of defending the senate, not to talk of projecting the wrong ideas of what it means to cooperate with the executive, and incompetently defining what legislative independence means. Last Sunday, Hon Gabajabiamila added insult to injury when he, it seems, spoke tongue in cheek, and managed in the process to open a window into how his mind works on the controversy. By suggesting that if being a rubber stamp could nevertheless deliver progress and still be worth it, he gave alarming vent to a dangerous logic unworthy of both his profession and calling.

No, Mr Speaker, the end does not justify the means. Those who voted the 9th Assembly had no illusions about the poor democratic records of the executive; they, therefore, expect the parliament, which is the most powerful symbol of democracy, to help moderate and mitigate the inexorable excesses of the government. It is a great pity that neither Sen Lawan nor Hon Gbajabiamila understands the legislative nuances they have been called upon to inspire, and have in consequence both leapt imprudently into parliamentary nothingness and outsourced their responsibility to civil society groups and other eminent Nigerians like T.Y. Danjuma who recently tantalised Nigerians with tales of the political witchcraft enveloping the country.
Source: The Nation