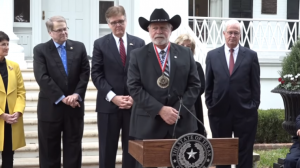 Jack Wilson speaks after receiving the first every Texas Governor’s Medal of Courage.

Jack Wilson, the 71-year-old volunteer security guard who stopped a gunman at West Freeway Church of Christ in White Settlement, Texas, ahead of the New Year was honored Monday by Texas Gov. Greg Abbott for his bravery.

Wilson was honored during a formal ceremony with the newly minted Governor’s Medal of Courage, which Abbott’s office describes as the highest honor given to civilians by the governor for those “who display great acts of heroism by risking their own safety to save another’s life.”

In his remarks on Wilson Monday, Abbott thanked God for placing Wilson in the church on the day of the shooting.

“Although we continue to mourn the loss of Tony Wallace and Rich White, we also thank God for putting Jack Wilson in that church that day to bring the attack to an end and to prevent the further loss of further life. Only God knows who is alive today because of Jack Wilson. What we do know is that so many lives were saved because of Jack Wilson’s quick action,” Abbott said.

“His calmness under pressure and above all else his courage and his willingness to risk his own life to save the lives of others. Courage has been defined as feeling fear yet choosing to act; following your heart when determining what to do; persevering in the face of adversity; stepping up to do the right thing to do; facing suffering with dignity and with faith. Jack Wilson embodies those traits. When faced with an evil that few of us can ever comprehend Jack Wilson responded with strength, with bravery and with love for those in the church that day,” Abbott continued.

“That’s why he volunteered to provide security at the church knowing that one day he may be called upon to step up and risk his own life. Jack, I know that you’ve been reluctant to accept the label of being called a hero but that is exactly who you are. You are a hero to everybody in the church that day. You are a hero to the people of Texas. You put your life on the line to ensure others would live. That is the hallmark of heroism and of courage. And it’s my honor to present to you the Governor’s Medal of Courage,” Abbott added.

Wilson, in his response to the award, said he didn’t feel like a hero but rather “a protector.”
“When events arise, you’re going to do one of two things. You’re either going to step up and do what’s right or walk away, and I’m not one to walk away,” he said.

In his remarks Monday, Abbott also praised the church’s Senior Pastor Britt Farmer for guiding his church through the ordeal.

“I saw firsthand how tight-knit the West Freeway Church of Christ community truly is. The fact of the matter is, it’s far more than just a community. It’s a family. A family of brothers and sisters in Christ who look out for one another even in the darkest of moments,” Abbott said.

“Britt, I want you to know, it’s easy to see here you’re not only a man of faith, you’re a man filled with grace provided by God. There was a serenity and calmness to the way you responded to this catastrophe. It’s almost unimaginable. Knowing that you lost some of your very best friends.

You lost some of your congregants. It was your church that was attacked but yet God empowered you with the strength that you needed to be able to instill calm and resolve in your congregants and God continues to work through you to this very day,” Abbott said before presenting Farmer with the state flag.

Crime against humanity: Report yourself to ICC, PDP tells Buhari