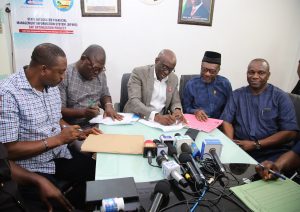 Workers in Delta will receive the new minimum wage in their January, 2020 salary as the state government and the organised labour have resolved to accept the template being used by the Federal Government for the implementation.

At a joint press conference where the agreement was signed in Asaba on Friday evening, the Secretary to the Delta State Government, Mr Chiedu Ebie stated that with the agreement, two months arrears would be paid to the workers.

“From the word go, Governor Ifeanyi Okowa made it clear that his administration will implement the new minimum wage in line with the template received from the Federal Government and so we have not deviated from that; we just needed to agree on the final details which was done courtesy of the negotiations that started sometime in December 2019.

“The highlights are pretty simple and straight forward and going by the circular we received from the National Salary Based Income and Wages Commission in Abuja which highlighted the new minimum wage and the consequential adjustments, the state government has implemented same.

“Essentially, the salary structure is broken down in which ministry or area a civil servant falls into and we have adhered to what we received from Abuja.

He disclosed that the new minimum wage would increase the state wage bill with about N700 million and urged the state workforce to always put in their best.

Chairman and Chief negotiator of the organised labour, Comrade Goodluck Oforbruku in his speech, said, “let me use this opportunity to thank Governor Okowa for keeping to his words and promises that he made that whatever the federal government agreed, that he will implement.

“At the end of January 2020, we will receive the new minimum wage with one month arrears and in the month of February, the remaining arrears will be paid.
“We want to assure the state government that workers in Delta will continue to support government programs and put in their best to ensure effective delivery of a stronger Delta.”
Chairman of Trade Union Congress (TUC), Comrade Martins Bolum, stated, “we want to thank Governor Okowa for making it possible for Delta to be the first state in the whole of South East and South South to implement the minimum wage.

“As at yesterday, only 5 states have implemented and Delta is the 6th state to implement the minimum wage in the country; we got positive reactions and encouragement from the workers of Delta while the negotiation was on.”

At the signing of the agreement were the Head of Service Mr. Reginald Bayoko, Commissioner for Finance Mr. Fidelis Tilijie, representatives of different trade unions among others.

Atiku in Asaba, promises to revive Delta Ports, says Buhari is incompetent, APC’s a failure; change the direction of this nation, Saraki urges...