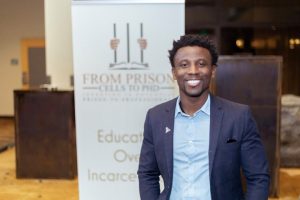 By Samuel Smith, CP Reporter
What started as selling drugs as a teenager in Ferguson, Missouri, led to a pattern of more serious poor decisions for Stanley Andrisse as he grew up.

By his mid-20s, he found himself convicted of three felony drug trafficking charges with a prosecutor calling for 20 years to life in prison. The sharp words said by the prosecutor that day in 2006 stuck with Andrisse.

As he began a 10-year prison sentence, he contemplated the label he was given by the attorney. Could he really be a “career criminal” with little hope of leaving the criminal lifestyle?
Looking back on his life choices as a teenager and young adult, he was led at the time to believe that the prosecutor was right.

“For much of my early incarceration, I saw myself as a bad person,” Andrisse told The Christian Post in a recent interview. “I saw myself as this career criminal. I saw myself as being someone who was hopeless. Once I got out, I thought the only thing that was really left for me to do was to continue doing what I had been doing.”

But thanks to encouragement from a mentor and his pursuit of higher education, Andrisse turned his life around.

Today, Andrisse is living proof of the abundance of talent and intelligence living within people imprisoned in correctional facilities across the United States. And if given the opportunity and access to postsecondary education, they are capable of reaching extraordinary heights many never thought possible.

“What we seek to do is really change that narrative around what that potential is [for people in prison],” he said.

Years removed from his imprisonment, Andrisse is an endocrinologist scientist and assistant professor at Howard University College of Medicine in Washington, D.C., where he is researching Type 2 diabetes and insulin resistance.

He also holds a visiting professorship at Georgetown University Medical Center and previously held an adjunct position at Johns Hopkins Medicine — a far cry from the career criminal label that had been pressed on him over 13 years ago.

Additionally, Andrisse serves on the frontlines of the growing bipartisan push to restore access to federal postsecondary education grants for people serving behind bars. He also mentors 100 formerly and currently incarcerated people each year as the executive director of a nonprofit called From Prison Cells to PhD (P2P).

P2P is one of many organizations advocating on Capitol Hill for a measure to restore incarcerated students’ eligibility to receive Pell Grants.

Pell Grants are a federal subsidy provided to low-income students to help them pay for college and other forms of postsecondary education. The grants are provided to all eligible students who apply.
But after tough-on-crime legislation passed in 1994, students in prisons have been barred from receiving Pell Grants. Since then, most college education programs in prisons have vanished.

Restoring Pell Grants to prisons, Andrisse argues, would provide more access to vocational classes as well as college and university degree programs. In due time, proponents contend, improving access to education in prisons will only reduce the nation’s troubling recidivism rate.

“Nationally, 43.3 percent to 51.8 percent of formerly incarcerated individuals will recidivate within three years of leaving prison,” Andrisse explained. “Education has been correlated with a drastic reduction in recidivism rates.”

What does the data say?

A research report from the independent national research and policy organization Vera Institute of Justice, published last January, states that most people in prison in the U.S. are not receiving postsecondary education despite the fact that 64 percent are academically eligible.

The report explains that 58 percent of people who are incarcerated in the U.S. do not complete any education program at all while in prison. Citing 2014 data, the report suggests that only 9 percent completed a postsecondary program during their prison time.

Part of the problem is that access to postsecondary education in prison is extremely limited.
Most existing programs are funded through the federal Second Chance Pell Experimental Sites Initiative, which serves a maximum of 12,000 incarcerated students nationwide annually through partnerships with over 60 higher education institutions.

The Vera Institute report estimates that if the ban on Pell in prisons is lifted, about 463,000 incarcerated people would be eligible to receive Pell Grants.

According to a 2014 RAND Corporation report, the odds of recidivating are anywhere from 36 percent to 43 percent less likely for those who take part in correctional education programs than for those who do not.

The RAND report also found that the odds of finding post-release employment for those who participated in a correctional education program was 13 percent to 48 percent higher than for those who did not.

Buhari thanks Obasanjo, educates him on successes so far