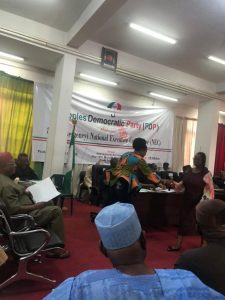 The Peoples Democratic Party (PDP) has decried and rejected what it called the destruction of democratic institutions and values in Nigeria, with special reference to the independence of the legislature, politicization of the judiciary and compromising of the security and electoral institutions.

This one of the resolutions taken today, Friday, January 17, 2020,at the end of the party’s 87th national Executive Committee (NEC) meeting in Abuja.

The full text of the resolution which condemned the desecration of the nation’s democratic tenet and values, climaxing in the national embarrassment of the Supreme Court’s manufacturing of votes and donating same to the APC and its candidate, Hope Uzodimma, reads:

Outcome of the 87th NEC Meeting of the PDP

Having witnessed the destruction of democratic values, ethos and principles; consistent breach of the 1999 constitution (as amended), the 87th NEC of the Peoples Democratic Party (PDP) decides as follows:
Assures Nigerians that the PDP will protect and defend democracy and its institutions in our country.
The PDP rejects the destructions of our democratic institution and values especially the independence of the legislature, the politicization of the judiciary and the compromising of our security and electoral institutions.

The PDP notes with pains, the gross abuse of the rule of law, the muzzling of the civil society and advocates of free speech as well as ordinary Nigerians.

The PDP totally condemns the utter desecration of judicial tenets and values, climaxing in the national embarrassment of the Supreme Court’s manufacturing of votes and donating same to the APC and its candidate, Hope Uzodimma, thereby robbing the people of Imo state, of the mandate freely given to Hon. Emeka Ihedioha as their governor.

The PDP observes that this calculated injustice perpetuated by the Supreme Court has proven that the judiciary under Justice Tanko Mohammed is no longer the last hope of the common man but rather the LOST HOPE of the common man in Nigeria.

The Supreme Court by its judicial summersault has eroded the faith and confidence, which Nigerians have in participatory election thereby showcasing that there will be no need for election in the future.

The PDP stands with the people of Imo state and Hon. Emeka Ihedioha in all steps being taken to reverse this injustice and reclaim the governorship mandate stolen through the Supreme Court.

The PDP assures Nigerians that, our party, through all available constitutional and legitimate means, including civil disobedience, will insist that this government must respect the rule of law and desist from influencing the judiciary, INEC and security agencies.
The PDP will not allow the judiciary, security agencies and other institutions of governance to become departments of the APC.