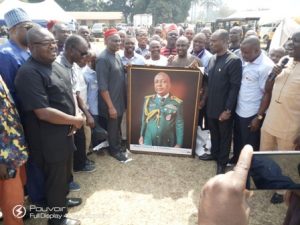 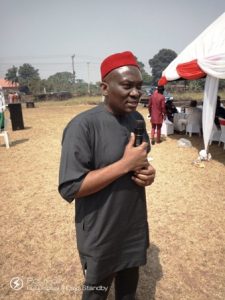 The Minority Leader of the Nigeria House of Representatives, Hon. Ndudi Elumelu has reiterated the need for Nigerians to continue to work toward the peace, progress and unity of Nigeria as an indivisible entity.

Elumelu gave this admonition at the reception in honour of the newly elevated Major General Lawrence Ayaegbunem Fejokwu of the Nigerian Army, held on Saturday, January 26th, 2020, at the Gbonosa Primary School, Onicha-Ugbo in Aniocha North Local Government Area of Delta State.

He called on Nigerians to continue to pray for the country, saying that happenings in the country necessitated the prayers of everyone for the country to survive the challenges facing its people from all fronts.

“It does not just take only the government to bring the people together, even the traditional rulers and individuals can contribute their best to ensure that we have a happy, peaceful and united Nigeria, and it is my prayer that we all in our individual positions contribute to that unity called Nigeria,’ the Minority Leader said.
Major Gen. Lawrence Fejokwu in a photograph with Catholic priests.

Congratulating Major General Lawrence Fejokwu on his elevation to the rank of Major General, Hon. Elumelu who also represents Aniocha/Oshimili Federal Constituency in the House of Representatives, noted that the newly decorated Maj. General, whom he described as a very humble man who he has known from childhood, has remained a critical element in the unity, peace and progress of Nigeria.

“Major General Lawrence Fejokwu is a man that is very empathic to the plight of the people; he is a good man, full of integrity. For somebody to rise to the rank that he has risen to, confirms that his productivity has been quite impressive in terms of his professional input and output and this, in effect means that in getting to where he is today, God has been able to use him to impact positively on the unity, peace and progress of Nigeria. This rightly informs why the military has found him worthy of being promoted to the rank of Major General,” Hon. Elumelu stated.

While commending the Military for finding him worthy to be promoted, the Minority leader equally advised the newly elevated Major General Fejokwu to remain committed and steadfast in his efforts at ensuring the unity, peace and progress of Nigeria, saying that his elevation was a divine mandate for him to continue to pursue the ideals that will secure the territorial integrity as well as the security of our country, Nigeria.

“My advice is for him to continue to do those things that led the Military to find him worthy for promotion. I also want him to remain humble and to always remember where he is coming from. As you see, the quality of personalities that are here to celebrate with him can attest to the fact that my brother, Major General Lawrence Ayaegbunem Fejokwu is truly a home man”.

Hon. Elumelu then commended Maj. General Fejokwu for his humility and for always being in touch with the grassroots and prayed that God, in his infinite mercy, will continue to elevate him to higher levels of fame beyond his expectations, to the benefit of Nigerians and to the glory of God Almighty.

Earlier, a thanksgiving mass in honour of the newly elevated Major General Lawrence Fejokwu was held at the All Saints Catholic Church Onicha-Ugbo.

The thanksgiving mass which had the Delta State Governor, Senator (Dr.) Ifeanyi Okowa represented by the State Commissioner for Finance, Sir Fidelis Tilije, was attended by very senior military officers that included over fifteen Major Generals of the Nigerian Army, who came to felicitate and celebrate with their colleague.

Speaking briefly at the thanksgiving mass, which was officiated by a term of catholic priests led by Rev. Fr. Peter Mobugwu, the Parish priest of the All Saints Catholic Church, Onicha-Ugbo, the newly decorated Major General Lawrence Fejokwu appreciated the guests for honouring him by coming from far and near to join him in thanksgiving to God for his elevation in his Military Career, even as he prayed that God will reward them abundantly.

Highpoint at the reception was the presentation of a giant canvass self portrait of Major General Lawrence Fejokwu in full Military regalia, to the man of the moment, by the class of ‘84’ of St. Pius the Xth Grammar School, Onicha-Ugbo. The presentation was performed by Hon. Ndudi Elemelu, Brig. Gen. Raymond Ochei and Chief Austin Omordi on behalf of the Class.

Nigeria is worth dying for, but not in vain