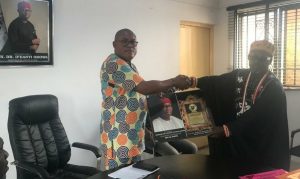 The Senior Political Adviser to the Governor of Delta state, Rt. Hon. Funkekeme Solomon has called for a concerted effort by Nigerians to protect democratic principles and institutions in the country from being further trampled upon.

Rt. Hon. Solomon made the call Monday, February 10, 2020 afternoon while receiving the Chancellor, Nigeria Institute for Political Leadership Administration and Control (NIFPLAC), Prof. Joshua Akpode, and members of the institute’s board in the conference hall of his office.

While commending the Chancellor for the institute’s passion to affect the political dynamism of the nation, the Senior Political Adviser urged the institute to evolve robust course contents with which to change the mindset of politicians so they can hold on dearly to operating democratic principles.

He decried the democratic setting in which those who by nature and training lack democratic culture are being celebrated for trampling on democratic tenets and institutions, he criticized President Muhammadu Buhari’s proclivity to violate the rule of law, and decide which court order to obey and disobey.

Making case for a collaborative effort to protect and sustain democratic principles and institutions, Rt. Hon. Solomon said: “You must be courageous enough to design courses that stress the need for Nigerians to respect democratic institutions and principles. You have more to do in evolving courses that touch on the political experience and reality of the nation for practical political administration, but less of theories, more of practical. The bookishness of our people has shown deficiency in the theory, as there is a difference between the study of political science and doing the actual practice of politics.

“We need a concerted action to stand firm against wrong policies by a government that is trampling on democracy and its institutions. We need affirmative actions to push away the dark days and bring in light.”

Rt. Hon. Solomon thanked NIFPLAC for the commendation and award conferred on Governor Ifeanyi Okowa, pointing out that the governor is a prepared leader. “He knows the cosmopolitan nature of Delta State, having acquired enough knowledge about the people of the state. As a result appropriate political behavior is being deployed in the service of the people,” he said, adding: “In Delta we are gradual in our approach, but firm.”

He informed the visitors that among the retinue of good works that Governor Okowa is doing in the state is the creation of a bureau of job creation through which hitherto unemployed lives have been transformed.

“Also, we believe in a strong grassroots; so we have appointed ward liaison officers to interpret to the people what government is doing. All policies are geared towards strengthening the grassroots,” the Senior Political Adviser said.

Earlier, Prof. Akpode, who is also the archbishop and president of pastoral and administrative head of the Builders Global Conglomerate (BGC) said NIFPLAC was born out of inspiration and set up to harness the political potentials and greatness of Nigeria through offering of various courses for the building of capacity for political elites.

Highlight of the courtesy visit was the presentation of an award of excellence to Governor Okowa by the chancellor, and received by the Senior Political Adviser. 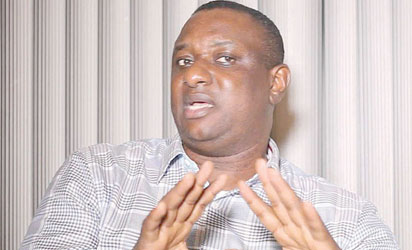 TRIBUTE – I will ask questions with stones: Odia Ofeimun at 70