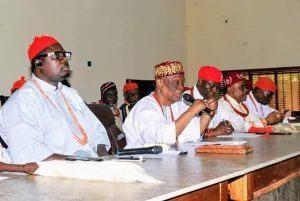 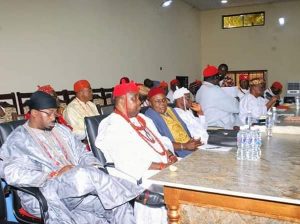 This was part of decisions reached at an enlarged meeting of members of the Delta North Traditional Rulers Forum held at the Palace of the Obi of Owa Dr Emmanuel Efeizomor the second.

The Chairman of the Forum Dr Emmanuel Efeizomor the second who is also the Chairman, Delta State Traditional Rulers Council read the Communiqué at the end of the meeting.

The meeting was attended by the Dein of Agbor Kiagborekuzi the first and other traditional rulers,Local Government Council Chairmen, Community leaders,President Generals,Youth. Leaders and Vigilante Groups from the district.

The Monarchs decried the unwholesome activities of arm bearing herdsmen who have turned various communities into a theatre of war.

They condemned in strong terms the unprovoked attacks on rural dwellers and wanton destructs of farm land and economic life wire of the people.

They contended that the conventional security architecture has failed in protecting the lives of the people in various communities and called on all to rise to the occasion by ensuring that everybody was protected from unwarranted attacks.

The traditional rulers equally expressed concern over the poor handling of the security situation by the federal government and advocated for immediate action to address the deteriorating situation in the country.

The monarchs called on the people to be extra vigilant and be more conscious of their security saying that there was need to commence documentation of all okada and keke riders in urban and rural centres in the district because of their alleged connivance in security breaches.

While thanking vigilante groups for their contributions so far in the maintenance of law and order they disclosed that there was need to screen them as some of them may sabotage the security plans.

They also urged security agents not to compromise the security of the people saying it could be counter productive .

They said any information received must be processed and treated with utmost confidentiality.

The kings commended Governor Ifeanyi Okowa for championing peace and development of the state and pledged their total support to his administration.