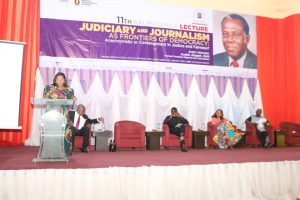 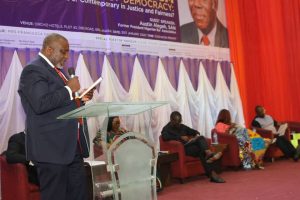 The point has been made for measures to be entrenched in Nigeria’s judicial system for judicial officers to account for the judgments they deliver.

The lecture was put together by the National Association of Seadogs (NAS), had as its theme: “Judiciary and Journalism As frontiers of Democracy: Anachronistic or contemporary in justice and fairness?”

Aleghe, who asserted that failure to uphold the rule of law sets the process for anarchy, said Nigeria must rise up fully to the duty of living up to the charge given to the press and judiciary.

Underscoring the power of the press, the lecturer said: “A seeming gag on the press, not to announce election results before the Independent National Electoral Commission (INEC); it is an indication of the power of the press. The press is so powerful that the policeman who would have done the wrong thing will refrain from doing it because he would not want to be reported negatively. Our democracy has been supported by the press and the judiciary.”

Aleghe said those angling to take control of the press and the judiciary, especially governments which own radio stations, television and the newspapers, do so because they know that by owning the press, they control the thinking of the people and ultimately who comes into government.

Aleghe called attention to the Kenyan example where the system made it compulsory for judicial officers to report each time they buy any new thing. “You buy new car, you must report it,” he said.

He continued: “Secondly, a system of ombudsman was introduced in Kenya. I did this case and if the judge did not follow the precedent, and one is able to make that case, then the judge is held accountable.

“We also need to bring up measures in the judiciary where judicial officers are held accountable for the judgment they deliver,” Aleghe said.

For him, both the press and the judiciary in Nigeria are doing their work well, but they also have their respective challenges.

The event also went into panel discussion that was moderated by the Osun State Commissioner for Information, Mrs Funke Egbemode. The panelists included that included Barrister Asue Ighodalo, Prof.Chukwuemeka Jaja Nwanegbo, and Funke Treasure. Ighodalo urged journalists and judges to stay on the straight and narrow path they have trodden from time gone by. “The judiciary should not depart from the days of the Niki Tobis, Kayode Eshos, the Chukwudifu Oputas, etc; and the press should not depart from the days of the Obafemi Awolowos, the Babatunde Joses, the nnamdi azikiwe’s , etc.

Funke Treasure gave kudos to the Nigerian journalist for the role played during the military era when journalists took journalism to the trenches. “”Journalism is actually pivotal in moving democracy forward; journalism is a moving train, holding government accountable, ensuring robust engagement and robust democracy. The press helps the judiciary by letting the people to see that the judiciary is important,” she asserted. 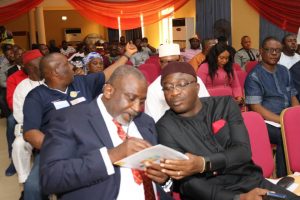 Delta’s commissioner for Basic and Secondary Education, Patrick Ukah, right with Emmanuel Gbahabo at the lecture.

Prof. Nwanegbo observed that judiciary and journalism are the two main institutions for the entrenchment of democratic principles in our system.

Earlier in his welcome address, NAS CAPN, Emmanuel Gbahabo recalled that the principal role of the judiciary is to protect rule of law and ensure supremacy of law, by safe guarding rights of the individual, settle disputes in accordance with the law and ensure that democracy does not give way to individual or group dictatorship.

“Equally, journalism serves an essential role in in democracies as it provides information that allows citizens to make informed decisions. It holds the powerful to account for the integrity, peace and fairness of governmental actions,” Gbahabo said.

Nwaobi visits Works Ministry with members of House Committee on Works … Solicits working synergy from Commissioner, others towards Stronger Delta