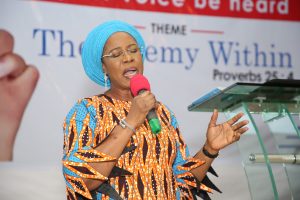 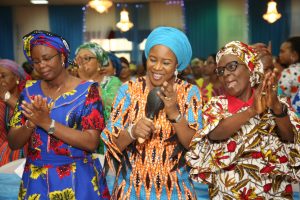 Mothers in Delta State came together today, February 3, 2020, again to pray for the wellbeing the state and its people and government.

The event which held at the Unity Hall, Government House, Asaba under the auspices of Mothers Arise, started 13 years ago, by wife of former governor of Delta State, Deaconness Roli Uduaghan, and sustained by her successor and wife of the Governor, Dame Edith Okowa.

The prayer sessions which were led at various times by notable men and women of God, had prayer points including prayer for the preservation of children who epitomized the future of the state; prayer for the families in Delta State, led by Pastor Chuks Anizor; prayer for Delta State led by Venerable Charles Osemenem and prayer for Nigeria led by Geoffrey Onyenachie.

Mrs. Okowa called the attention of the congregation to the sermon delivered by Lady Chimemeze Onya-Odike, who preached on the theme: “The enemy within”, taken from the book of Proverbs 25:4 that says, “Take the impurities out of silver and the artist can produce a thing of beauty,” and urged women to purify themselves by dealing with the enemy within so that God can use them for worthy causes.

“Can God use you and me? You cannot be used by God except you have dealt with the enemy within,” Mrs. Okowa said, pointing out that it is not about the number of houses one has built or the number of cars we own. “The enemy within is very wicked indeed,” she said, aligning with the submission of the guest preacher. “Offences must come, but we must make way for forgiveness. The Lord is saying, ‘forgive everybody the offences committed against you.”

She said what the preacher has taught in the sermon is that people must be more careful about how they subject themselves to the promptings of the enemy within, and that indeed, the human being can be his or her own enemy. “It is when we deal with the enemy within, which are those ungodly habits that we make ourselves useable by God for His glory; after all, we are created for His pleasure,” she said.

Mrs. Okowa paid tribute to her predecessor, Mrs. Roli Uduaghan for starting a good thing, and also praised Mrs Utuama for being party of beginning a good thing that is today being built upon.
She pointed out that the greatest way to win souls for Christ is through one’s character. “It is not right to preach the gospel and the people don’t see in our character what we are preaching to them,” she said.

Earlier in her sermon, Lady Chimemeze said the Bible passage in Proverbs 25:4 is admonishing the believer to deal with the enemy that lives inside the human person. “Take away the dross (impurities) from silver, and there shall come forth a vessel for the finer.”

“The enemy within are many inside us. Inside is bitterness, lust, anger, envy, jealousy, greed, unforgiveness – these things open the door for the enemy to come in.”

Lady Chimemeze cautioned women against greed, envy and jealousy. “Lust is not only about sexual immorality; lust also has to do with selfish desire that arises and makes you to want to possess what you don’t need. The desire to get what you don’t need just because you saw somebody wearing that thing and so you want it. It is about not being contented. Lust even makes women to fall into the trap of the devil. The devil puts lust in people’s heart, causing them to wear what exposes the sensitive parts of their body,” she said.

She then called on women to get their heart renewed and ease it of impurities that easily beset the human being.

PDP and a loss of sense of history