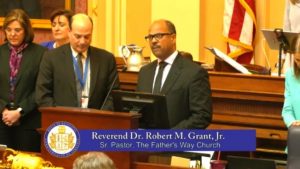 The Reverend Robert M. Grant, Jr., senior pastor of The Father’s Way Church of Warrenton, Virginia, giving the opening prayer at a meeting of the Virginia House of Delegates on Tuesday, Feb. 11, 2020. | Screengrab: virginiageneralassembly.gov/

By Michael Gryboski, Christian Post Reporter
A Virginia pastor was condemned by Democratic state lawmakers for giving an opening prayer before the House of Delegates that warned of God’s condemnation of abortion and same-sex marriage.

The Rev. Robert M. Grant Jr., senior pastor of The Father’s Way Church of Warrenton, gave the invocation before the Democrat-controlled House on Tuesday morning.

“We pray today that the Virginia House of Delegates will exercise their authority, making right decisions for citizens of this Commonwealth,” Grant began his prayer.

“I pray that every bill or law be fully considered by both Republican and Democratic delegates, having the best interests of the citizens of Virginia.”

After asking for the legislature to not provoke God’s anger by making laws that could destroy the fabric of this great state, Grant listed several examples of such laws.

These included concerns over racial inequality regarding criminal punishments, prison reform, and the need to help keep families together.

Grant garnered backlash, however, when he advocated for pro-life measures and referred to the proximity of abortion clinics to minority neighborhoods as a “planned urban genocide.”

“The unborn has rights and those rights need to be protected. They should never be denied the right to exist, the right to develop or the right to have a family. The word of God has given us a warning: woe to anyone who harms an innocent child,” Grant continued.

Grant also prayed for the House of Delegates to “uphold the Virginia family” with legislation that “will always protect the biblical traditional marriage as God instructed the first man and the first woman in the Bible.”

“We should never re-write what God has declared,” he continued. “It’s not yours to change or alter its wording. The Bible is the copyright of God’s word. Marriage is to join a biological male and a biological female in holy matrimony, not to provoke the almighty God.”

While warning about the need for laws to protect marriage, Democratic House Speaker Eileen Filler-Corn of Fairfax interrupted the pastor by “banging her gavel” and summarily led the chamber in the Pledge of Allegiance.

Grant was briefly heckled during his prayer and some Democratic lawmakers walked out of the House to protest his words, according to the Virginia Mercury.

In response to the invocation, Democratic Delegate Luke Torian, himself the pastor of First Mount Zion Baptist Church of Dumfries, denounced Grant’s invocation as “totally wrong and disrespectful to every member in this House.”

“We are NOT to give political speeches and to make people feel bad. That is NOT what a prayer is supposed to do. And over the years that I’ve been here, on both sides of the aisles, there have been clergy who have not honored the integrity of the request,” he insisted.

Torian, whose comments received a loud ovation from the chamber, said he hoped that future clergy who come to give invocations will “respect this House and all of us who serve here and who serve the people of the Commonwealth of Virginia.”

Bills advanced by the legislature include the Equal Rights Amendment, an LGBT anti-discrimination measure called the Virginia Values Act, and looser regulations of abortion clinics.

Last month, faced with the prospect of increased gun regulations, Liberty University President Jerry Falwell Jr. vowed to call for “civil disobedience” if they were enacted.

“Pretty sure I’m going to call for civil disobedience if the Democrats go through with this,” Falwell said in an interview with conservative radio host Todd Starnes.

“Just like sanctuary cities in liberal states refused to obey the federal law when it comes to [illegal]immigration, I think it’s time for conservatives.” 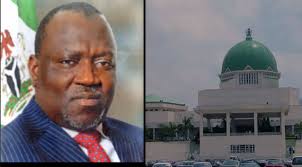