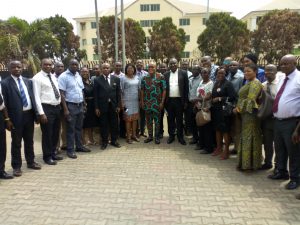 Civil servants in Delta State have been commended for not relenting in giving their continued support to the Peoples Democratic Party (PDP)-led administration of Governor Ifeanyi Okowa as a way of reciprocating the good deeds of the governor who hold the civil servants in very high esteem.

Senior Political Adviser to the Governor, Rt. Hon. Funkekeme Solomon made the remark today, Thursday, February 27, 2020 when he received in audience the Grassroot Workers Network (GWN), a group of public servants in the employment of Delta State Government that are totally committed to the actualization of the SMART Agenda of the governor.

Rt. Hon. Solomon acknowledged that the group worked, especially as a strategic response to the deliberate and mischievous propaganda by desperate political actors to misinform the electorate, particularly public servants in the state that Governor Okowa was averse to their well-being, just to create disharmony between the Governor and the state workforce.

He pointed out that because Governor Okowa loves civil servants a point attested to by the payment of the new minimum wage, regular payment of workers’ salaries, and the N800 million approval for pensioners. “It is in the interest of civil servants to continue to support the civil service friendly government of PDP so as to continue to have a stable state government that is also friendly,” the Senior Political Adviser said.

He urged the civil servants to plan well for their retirement, so as to continue with life after service although they may be retired but not tired.

Earlier, National Chairman of GWN, Mr. Itie Efe to the Senior Political Adviser that the group was birthed in the build up to the 2019 general elections, arming itself with the intimidating score card of Governor Okowa in his first tenure, the group went into action, gavanising public opinion to erase the erroneous perception that the governor is anti- public servants by carrying out chair-to-chair and table –to-table campaigns.

Efe said they came to the office of the Senior Political Advise to highlight the group’s contribution to the success story of Governor Okowa and the PDP for proper recognition and possible appreciation.

The Senior Political Adviser promised to convey their message to the governor.