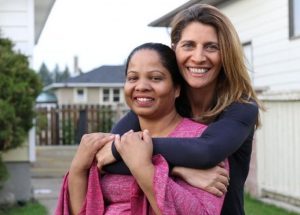 By Samuel Smith, CP Reporter
During a trip to France to promote her new book, Christian mother Asia Bibi opened up about how prayer and Scripture sustained her throughout a decade of imprisonment over allegations that she insulted Islam and its prophet.
Bibi, whose real name is Aasiya Noreen, spoke with several news outlets last week and shed more light on what was going through her mind and dreams as she endured what she called a “trial sent by God.”
“When a human being is tested, the desire to succeed, to overcome the trial, is extremely strong,” Bibi was translated as saying during an interview with the Catholic news website Aleteia. “I knew that prayer would help me in this sense and many signs encouraged me to pray.”
The farmworker from Sheikhupura was accused of blasphemy by Muslim laborers in 2009 and imprisoned. She maintained her innocence but was eventually convicted. Since blasphemy is a crime that is punishable by death or life imprisonment in Pakistan, Bibi was sentenced to death by hanging in 2010.
Bibi, who has five children, explained that one night in prison she had a dream about a priest who made her recite verses from the Bible.
“When I opened my eyes, I remember being amazed that I no longer saw him,” Bibi said through a translator. “I thought that maybe God was sending me a sign that I should try to learn those verses which would help sustain me. So that’s what I did. I read the Gospels very regularly.”
Bibi told Aleteia that the phrase “The Lord is your refuge” kept coming back to her.
“Over and over again, it was the first psalm I came across,” Bibi explained.
She didn’t specify which psalm she was referencing. However, Psalm 46 states: “God is our refuge and strength, a very present help in trouble.” Additionally, Psalm 91 reads: “I will say of the Lord, He is my refuge and my fortress: my God; in him will I trust.”
In an interview with the British Broadcasting Corporation, Bibi explained that she always believed that one day she would be released no matter how hard imprisonment was for her.
“I cried so much,” Bibi recalled. “I kept crying for a week. I kept thinking, ‘what is happening to me?’”
Bibi shared that her children’s future was “very badly affected” by her imprisonment because they could no longer go to school. At the time of her imprisonment, two of her children were in the early stages of education.
But for Bibi and her family, God eventually delivered her freedom.
After much international pressure, Pakistan’s Supreme Court acquitted her in October 2018 and she finally fled to Canada with her husband and two daughters in May 2019.
“It was so strange after I met my husband and kids after so long. I couldn’t understand my emotions,” she told the BBC. “When I hugged my children, I cried. I kept thinking about their childhood. I can’t forget their childhood. When the past comes to mind, I can see my little daughters crying. That bit of past I haven’t been able to forget.”
The family arrived in Canada last May. Bibi and her family were given a one-year stay in the North American country. The family has since lived in an apartment in an undisclosed location.
Bibi met with French President Emmanuel Macron last Friday. Bibi told reporters that Macron invited her to live in France. However, Bibi still needs time to decide on whether she will apply for asylum in the European country.
“I have received the invitation from the president and the French Republic, and I’m honored,” Bibi said.
Bibi’s new memoir Enfin libre! (Finally Free) was co-written by French journalist Anne-Isabelle Tollet, who was among the first to advocate for Bibi’s release. In the book, Bibi recounts the abuse and torment she suffered at the hands of guards.
Bibi told the BBC that she was told by guards during her imprisonment that she could be released if she renounced her faith in Christ.
“But I said, ‘No, I will live my sentence, with my faith,’” Bibi was quoted as saying.
Bibi called on the Pakistani government to reform the country’s blasphemy laws and carry out proper investigations when accusations are made.
“Innocents shouldn’t be punished for no reason,” Bibi said. “People in prisons who are innocent should be freed.”
Pakistan ranks as the fifth-worst country in the world when it comes to Christian persecution, according to Open Doors USA’s 2020 World Watch List. Pakistan is also labeled by the U.S. State Department as a “country of particular concern” over issues of religious freedom.
While Bibi has been freed from prison, there are dozens of other citizens of Pakistan imprisoned on blasphemy charges. According to Pakistani human rights activist Shaan Taseer, there are as many as 200 people imprisoned for blasphemy in Pakistan with over 40 on death row.
In her interview with Aleteia, Bibi called for the Pakistani government to release Christian woman Shagufta Kausar. Kausar, along with her husband, was accused of sending blasphemous text messages even though neither of them can write. The couple was sentenced to death in 2014.
“She has my full support, and if my story and testimony can help her, I would be very happy,” Bibi said. “But I know they’re in good hands: Saif-ul-Malook, the same lawyer who helped me, is defending them. Beyond Shagufta, all those who are still in detention today need to be helped.”
“I’d like the world to unite behind this cause to obtain their release, whether they belong to minorities or to the majority,” Bibi continued. “All must be heard! That’s my fight today. I believe that the anti-blasphemy law must be reformed. That’s what I wish to dedicate my life to from now on.”
Source: https://www.christianpost.com/news/asia-bibi-says-imprisonment-was-a-trial-sent-by-god-but-refused-to-renounce-her-faith.html