Home Delta State Build yourself up to enhance your worth, relevance in society, Solomon tells... 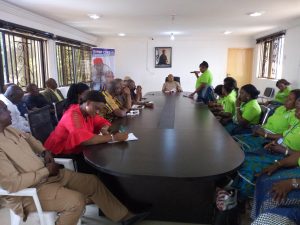 Leader of the hairdressers association in Delta, Mrs Priscilla Chibueze delivering her speech while the Senior Political Adviser, Rt. Hon. Funkekeme Solomon and others look on. 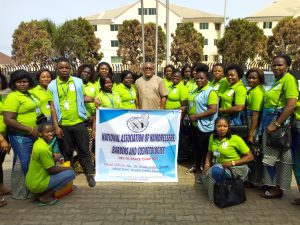 Rt. Hon. Funkekeme Solomon in a group photograph with the executives of the Hair dressers’ association.

Members of the Nigerian Association of Hair Dressers, Barbers and Cosmetology have been told to build themselves into relevance by ensuring that they provide standard services to customers. That way, they will develop their potentials and improve their trade.

Senior Political Adviser to the Governor of Delta state, Rt. Hon. Funkekeme Solomon gave the advice on Monday, March 2, 2020 when he met with executive members of the group in the conference room of his office.

He commended the social service providers assuring them that Governor ifeanyi Okowa interested in the group because of their strategic importance of the trade in helping to build peace between husband and wives in their homes.

Urging them never to see themselves as inferior, but should rather hold their shoulders high for using their trade to mould lives and beautify people, Rt. Hon. Solomon said improving on their service to customers will involve training their workers and retraining themselves on need to exhibit good manners and human relations in their dealings with customers.

“As an association, you should think of how to develop and improve on your trade. You should have the courage to identify cosmetics that are harmful to customers and carry out a campaign against dangerous and bad products and calling government’s attention to such products. You can engage in a campaign against fake products,” he said.

“You have a huge role to play in helping to affect lives because of the special nature of their jobs that makes them have direct and quiet audience with customers who they could give useful information to guide them in life.”

He also urged the group to see themselves as agents that could be used to help and affect lives and to help the state government in the campaign against human trafficking by talking to customers and dissuading them from being lured into taking unnecessary risks of their lives. “Make your membership to be gender friendly by getting more men into your association, not this one man and see that you love yourselves as women,” he said.

Earlier, the President of the group, Mrs. Priscilla Chibueze had congratulated the Senior Political Adviser on his appointment, and requested that the state government should prove them with a bus to ease their movements across the state, as well as help to take over and equip a bungalow given to the group by a well-wisher. The facility will be used for training and retraining of their members, as well as others that seek to make a career.

Give us a place to sell, displaced traders tell DTSG

Tony Obuh’s funeral: You’ll be remembered by how you touched the lives of others,...