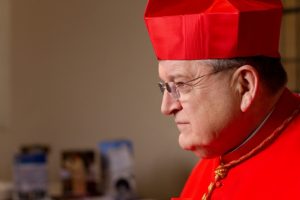 By Michael Gryboski, Christian Post Reporter
A Roman Catholic Church cardinal has called on churches to continue holding worship services and making the sacraments available despite the coronavirus pandemic.

Over the past several weeks, large numbers of churches of all denominations have taken to canceling worship services to help curb the spread of COVID-19.

Cardinal Raymond Burke, a noted conservative critic of Pope Francis, posted a statement on his website last week offering his views on the question of whether churches should close.

“Just as we are able to purchase food and medicine, while taking care not to spread the coronavirus in the process, so also we must be able to pray in our churches and chapels, receive the Sacraments, and engage in acts of public prayer and devotion, so that we know God’s closeness to us and remain close to Him, fittingly calling upon His help,” Burke wrote.

Burke went on to denounce the idea from “our totally secularized culture” that worship and prayer are “not essential and therefore can be cancelled for the sake of taking every precaution to curb the spread of a deadly contagion.”

“But prayer, devotions and worship, above all, Confession and the Holy Mass, are essential for us to remain healthy and strong spiritually, and for us to seek God’s help in a time of great danger for all,” he continued in the post.

“Therefore, we cannot simply accept the determinations of secular governments, which would treat the worship of God in the same manner as going to a restaurant or to an athletic contest.”

Burke said he believes there are ways to adapt mass and the sacraments to be compatible with “social distance,” such as having worshipers sit farther apart and applying disinfectant to the screen between cells in a confessional.

“Even if, for whatever reason, we are unable to have access to our churches and chapels, we must remember that our homes are an extension of our parish, a little Church into which we bring Christ from our encounter with Him in the bigger Church,” Burke added.

“Let our homes, during this time of crisis, reflect the truth that Christ is the guest of every Christian home. Let us turn to him through prayer, especially the Rosary, and other devotions.”
Burke’s views brought criticism from many, including the editorial staff of the National Catholic Reporter, which published a piece on Tuesday calling his comments an example of “ignorance and stupidity.”

“On the other hand, we’re accustomed to the good cardinal’s eccentricities, most of which, given his current removal from any perch of power, can be ignored,” the publication argued in its editorial. “But his encouragement to his determined base of admirers and others who find some solace in his traditionalist formulations is downright dangerous in the current moment.”

Be Voice of Caution, Reconciliation in Nigeria, Okowa tells CAN …Says Church Must Stand for Truth, Defend the Oppressed