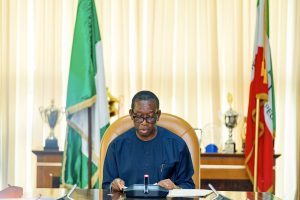 >Governor Okowa making his state wide broadcast to the people of Delta State.

Governor Ifeanyi Okowa of Delta has directed closure of all primary, secondary and tertiary schools in the state with effect from Thursday, March 26, 2020 for 30 days in connection with Coronavirus pandemic.

The governor gave the directive in a state broadcast in Asaba today, Friday, March 20, 2020 and said that the closure of the schools for 30 days in the first instance was aimed at preventing possible spread of the virus.

He stated that as at March 20, Delta was free from the Coronavirus but had to take precautionary measures to ensure that the pandemic does not come to Delta.

The governor assured that the State Government had taken several measures,, including the establishment of a purpose-built and well-equipped isolation centre at the Federal Medical Centre in Asaba to handle any emergency, to guard against further spread of the virus.

He added that the state government was assisting in the local production of alcohol-based hand sanitisers, assuring that government would not spare any effort or resource to ensure the health, safety and protection of citizens.

Okowa advised that it was important for people to know that observing proper hygiene and World Health Orgainsation-mandated safety protocols remained the best way to protect citizens and stop the spread of this virus.

He said: “As you are aware, the world is currently battling with the Coronavirus also known as COVID-19 pandemic.

“As at March 16 this year, cases of COVID-19 have been reported in 151 countries and in Nigeria, there have been 12 confirmed cases recorded so far.

“There is yet no confirmed case of Coronavirus in Delta State. However, we have taken some proactive steps to prevent the spread of the disease and stop transmission if it occurs.

“The State Government has already established a purpose-built and well-equipped isolation centre at the Federal Medical Centre in Asaba to handle any emergency.

“We have embarked on training of healthcare personnel to work at the isolation ward, training and engagement of 129 Red Cross workers across the State is currently on-going.

“We have identified and established holding rooms in all zonal and all state hospitals across the State as well as training of five members of the Rapid Response Team in each local government area.’’

The governor also said “the state government has embarked upon training of laboratory scientists on sample collection, adding that “Arrival cards are to be completed by all in-bound passengers and crew in the two airports (Warri and Asaba) and three seaports (Warri, Koko, and Sapele).

“As a further precautionary measure, all passengers arriving Asaba Airport are already subject to temperature measurement and all incoming sea vessels are to observe a 14-day quarantine period to be cleared by the Port health personnel before berthing in any seaport in Delta.

“Furthermore, the Ministries of Health and Information have been mandated to intensify public enlightenment campaigns to inform and sensitize the public on safety protocols regarding COVID-19.’’

He disclosed that COVID-19 currently had no cure, adding that the virus was believed to spread mainly by person-to-person contact and could be transmitted through handshakes, coughing and sneezing by a carrier as the droplets could fall on the mouths and noses of people around, or possibly inhaled.

Okowa cautioned that the best way to prevent the virus was to avoid being exposed to it, “by avoiding close contact with people who are sick or appear to be sick’’.

“We must practice social distancing; avoid handshakes and hugs, maintain about five feet distance when talking with people.”

“We must wash our hands thoroughly with soap and water for 20 seconds after leaving the office, workshop, market, bus/taxi, motor parks, and public gathering of any sort. Do the same after blowing your nose, coughing or sneezing, he said

“I want to appeal to all of us to remain calm and vigilant. We must not panic. We can easily overcome this threat if we abide by the above measures and all other information from the National Centre for Disease Control (NCDC).

“We will easily defeat the spread of this virus if everyone sees himself/herself as a potential carrier who does not want to spread the virus. To adopt a superstitious approach as many of us do that ‘it is not my portion’ could prove to be fatal.

“This is no time for self-medication. If you notice at any point in time that you have fever, do not hesitate to call on the relevant authorities/ or visit the nearest hospital.

“As a further precautionary measure, I wish to direct that all primary, secondary and tertiary institutions are to be closed effective Thursday, March 26, 2020 for 30 days in the first instance.

“Parents should endeavour to provide hand sanitizers for their children and hand wash stations must also be provided at easily identifiable points in the markets.

“All offices must ensure that they are fitted with the right type of sanitizers. Supermarkets, malls, churches and other places of worship should provide hand sanitizers for customers/worshippers.

“We are carefully monitoring developments around the country and the State and will update Deltans accordingly and, where necessary, take drastic actions.

“I advise all Deltans to desist from publishing unverified information capable of causing panic and fear, especially on the social media.

“At this point, what we must fear most is the spread of false information not even the virus itself; infodemic is a greater danger than the pandemic. Deltans are, therefore, advised to get information from only official channels,” he stated.

Speaking to newsmen shortly after the governor’s broadcast, the Commissioner for Health in the state, Dr Mordi Ononye, debunked the rumour of an alleged case of COVID-19 in Warri.

According to him, so far, there is no confirmed case of the virus in Delta and we are not interested in creating panic in the state.

Ononye said that the state government had been proactive in ensuring that preventive measures were being taken, adding that “if before the 26th March, there is a reason to change the decision to shut down schools, we will definitely do so.”