Home News God is using coronavirus to wake us up to fragility of the... 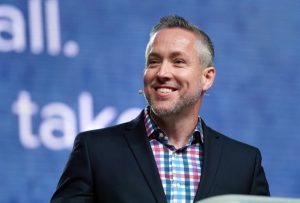 J.D. Greear, president of the Southern Baptist Convention (SBC) and pastor of The Summit Church in Durham, N.C. | Kathleen Murray

By Leah MarieAnn Klett, Christian Post Reporter
Pastor J.D. Greear explained how Christians should respond to the coronavirus and suggested that God is using the pandemic to show people that the world is both temporary and incapable of sustaining us.
In a recent episode of his podcast, Greear, pastor of The Summit Church in Durham, North Carolina, said that because Jesus told His disciples that it was not for them to know the times or the seasons, nor the day and hour of His return, “it’s unwise for us to say, ‘Hey, this indicates that the coming of Jesus is right around the corner.”
“But having said that, what I think Jesus is showing there, is that God uses things like this to indicate and shake up the foundations of the world, telling them the foundations they are standing on are fragile and there is a new reality,” he clarified.
The epidemic is also showing “God’s mercy,” the pastor explained, demonstrating that many of the things we have trusted in — from the economy to the healthcare system — won’t sustain us.
“You just think about how something we can’t even see has rocked the foundations of our society,” he said, stressing that even if the world recovers from the virus, “the economic implications of this are going to be staggering.”
“God is saying … the world you are living in is not as secure as you think it is, and you need to rethink the foundations that you have.”
When responding to the crisis, Christians should first and foremost “heed wise counsel,” Greear said.
“It’s not a time for carelessness or bravado, nor is it a time for panic,” he said. “We all have a natural bias. Some of us gravitate toward worst-case scenarios and doomsday prophecies and we overreact. Others of us tend to brush aside reports as hysteria or some kind of mainstream media political agenda. It’s probably the wisest thing to recognize what your bias is and listen to an array of counsel.”
“Our disposition as a church, at this point, is to defer to the CDC and our government,” he added. “We believe this is why God gave us governing officials, and so in absence of any compelling reason to not follow their instruction, that’s what we’re going to do.”
The president of the Southern Baptist Convention advised young people: Don’t take anything for granted, and even if you are low-risk, you should take precautions for the sake of your neighbors. He quoted another Christian leader, Andy Crouch, who once stated that, “love, not fear, is the reason we should change our behavior.
Second, Greear encouraged the Church to move forward in faith, not backward in fear.
“This doesn’t surprise [God] and He’s going to give us the resources to be faithful,” he said. “What does faithfulness look like? It’s not retreating in fear, it’s serving God in faith. The early church wasn’t known for stockpiling ample food and ammunition for themselves or spreading fear on social media.”
“Christian witnesses throughout history have been known for hope, faith, and self-sacrifice,” he added. “We do this because we follow a Savior who ran toward tragedy, not away from it.”
Greear advised Christians to care for the elderly, vulnerable, and hourly workers; buy gift cards from service places; support healthcare workers, and participate in church ministries.
“Proclaim hope,” he stressed. “This is a time where God is shaking the foundations, and we have a unique moment to step in and show Gospel hope, that when everything else around us turns into shifting sands, we are able to say, ‘Christ is the solid rock and all other ground is sinking sand.’”
Greear advised using this season to develop good habits, encouraging listeners to view it as an “extended Sabbath.”
“Don’t just make it through this time. Redeem this time. Don’t waste your quarantine,” he said. “We know that God does a lot of his greatest works in times when there isn’t a lot of activity.”
He concluded by saying, “I don’t know the future, but we know that while we’re alive we should live. And what living looks like is growing in Christ, it looks like meeting needs, it looks like making the Gospel famous.”
As the coronavirus continues to spread across the United States, a number of pastors and ministry leaders have offered advice and encouragement to those uncertain of what the future holds.
Renowned apologist Ravi Zacharias recently urged Christians to “combine our faith and trust in God with wisdom and common sense.”
“Trust in God doesn’t mean you’re careless in what you do. You have to protect your children, you have to protect your family, and if the elderly are the most vulnerable, they’re the ones we need to protect,” he said.
Zacharias urged Americans to avoid falling into the “extremes” of panic and fear or “complete indifference.”
“In America, we get so used to comfort that when we find something is out of our control, it’s very daunting,” he said, commending the U.S. government for “taking the lead” in helping Americans “navigate” the virus.
“Be sober-minded about it, don’t be cavalier about it. And make sure that at all times, your life and your relationship with God and with your family is strong. That’s what’s going to matter at the end of it all,” he advised.
• https://www.christianpost.com/news/jd-greear-god-is-using-coronavirus-to-wake-us-up-to-fragility-of-the-world.html

#ENDSARS Protest: A national movement, says Muoboghare, scolds Police for being rotten at the...