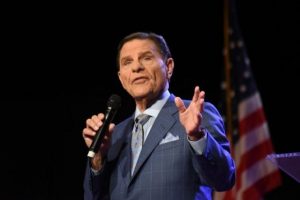 Texas-based televangelist Kenneth Copeland of Kenneth Copeland Ministries urged people not to panic over the new coronavirus, calling it a “very weak strain of flu” that healthy people shouldn’t fear.

“It (coronavirus) is so weak their symptoms are almost alike,” Copeland said Wednesday in a Facebook Live broadcast of his Victory News report. “Some people had it and didn’t even know it. They just haven’t found the way to knock that thing in the head yet.”

Copeland’s broadcast began with a highlight of a different strain of the coronavirus listed on the label of a bottle of Clorox to demonstrate that other strains of the virus have been around for a while.

He also pointed to a recent announcement from scientists at Israel’s The Galilee Research Institute that they are on the cusp of developing a vaccine for the new coronavirus in the next few weeks.

“Our basic concept was to develop the technology and not specifically a vaccine for this kind or that kind of virus,” Dr. Chen Katz, MIGAL’s biotechnology group leader told the Jerusalem Post Wednesday. “The scientific framework for the vaccine is based on a new protein expression vector, which forms and secretes a chimeric soluble protein that delivers the viral antigen into mucosal tissues by self-activated endocytosis, causing the body to form antibodies against the virus.”

He added: “We are in the middle of this process, and hopefully in a few weeks we will have the vaccine in our hands. Yes, in a few weeks, if it all works, we would have a vaccine to prevent coronavirus.”

Copeland then said that much of the reaction to the new coronavirus has been fear-based and pointed to 2 Timothy 1:7 to show why God would prefer for Christians to have faith that they will overcome the virus even if they are infected.

“For God hath not given us the spirit of fear; but of power, and of love, and of a sound mind,” he said. “So fear is a spirit and that spirit is the devil and he is the spirit of death.”

Amen. So fear of this virus, forget about corona. It’s another form of the flu,” he said.
Copeland, who was born in 1936 and celebrated his 83rd birthday last December, said he has been around a long time and has seen several different strains of the flu, including the Hong Kong flu pandemic which occurred in 1968. Copeland recalled an outbreak he experienced around 1957 and 1958 which was during the time of the Asian Flu virus.

The Asian Flu virus was first reported in Singapore in February 1957, Hong Kong in April 1957, and in coastal cities in the United States in summer 1957. The estimated number of deaths was 1.1 million worldwide and 116,000 in the United States, the CDC said.

In contrast, officials at the CDC and epidemic experts from universities around the world estimate that if the new coronavirus gains a foothold in the U.S., between 160 million and 214 million people in the U.S. could be infected, The New York Times reported. As many as 200,000 to 1.7 million people could die.

As of Friday afternoon, at least 1,714 people in 47 states and Washington, D.C., have tested positive for coronavirus, according to a New York Times database, and at least 41 patients with the virus have died.

“When I was in the Army 1957, 1958, the first one of those things hit. It was called the Hong Kong Flu. Nobody ever heard of it before. And man, I’m telling you. I was stationed in Fort Gordon, Georgia. And it hit with a vengeance,” Copeland recalled.

He explained that he was stationed at the Army hospital and when the flu hit they had about 35 patients. By the next morning, he said, there were more than 500. He said they worked to clean the hospital and tried to do everything to keep it from spreading, but people died anyway.

Since then, the flu virus has continued to mutate, he said, adding that healthy people shouldn’t worry.

“The thing is, healthy people are not dying from this. It’s elderly people that are already sick,” he said, noting that “what we need to do is deal with fear.”

When it was noted that there are pastors who were concerned that people won’t come to church because of the new coronavirus and others who are advising congregants not to attend, Copeland argued that he wants people to attend his church.

“I want you in my church. If we have to pass out thermometers. If we find one with a fever, let’s get him healed right there,” he said. “What if you do get it? Big deal!”

He further noted that he recently battled a bout of the flu and he praised his way out of his sickness in 15 minutes while he was at a ministers’ conference.

He further praised Vice President Mike Pence and his coronavirus task force for praying about how to respond to the pandemic.

“That’s why we need this president in there for another four years. That’s the reason why, and on account of that man right there. Because if you give Donald Trump four more years he’ll be president in eight years. Mike Pence, he is the spiritual leader on this team,” Copeland said.

Diezani on cabal-sponsored attacks on her: Says EFFCC’s trial by media, disingenuous; to give a dog a bad name