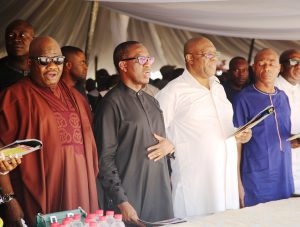 Delta Governor, Senator Ifeanyi Okowa has stressed the need for the privileged to always extend helping hands to others in need so as to make the society a better place.

The Governor who was speaking during the funeral service for late Mrs Idowu Timi, mother of Hon. Toye Timi in Afinaware Quarters of pantani town , urged the children of the deceased to take solace in the fact that their mother lived a memorable life worthy of emulation.

According to the governor, “a lot of good things have been said about Late Mrs. Idowu Timi, adding that from what has been said about her, it is clear that she was a peaceful, gentle and friendly woman as well as a devout Christian.”

“That she lived a life of generosity means that she must have inculcated that virtue of generosity in her children and I thank God for her life,” he added.

The Governor , urged the children of the deceased to live peaceful and generous life that their mother was known for by being kind and generous to people around them.

While saying that life should not be about self and family members alone, Okowa harped on the need to extend helping hands to others in need, even as he prayed that people would remember the late Mrs. Idowu Timi through her children.

Earlier in his sermon during the open air funeral service, the Bishop of Southern Izon Diocese of Church of Nigeria, Anglican Communion, Rt. Revd. Edafe Emamezi said life was not about earthly achievements alone, but the relationship established with God because of the reality of heaven and hell in death.

Bishop Emamezi who said that the Late Timi lived her life for God and humanity, reminded the congregation of the need to draw near to God for them to have a permanent place in heaven at death.

To those in position of trust including politicians and traditional rulers , the cleric said that they should lead with the fear of God.

One of the children of the deceased, Hon Timi Tonye who is an Education Consultant to the state government, described his late mother as a disciplinarian, pointing out that she moulded them to become responsible citizens.

He promised that they (Mrs. Idowu children) would uphold the good virtues she impacted on them, just as he expressed appreciation to the governor, his deputy and other dignitaries that attended the burial ceremony of his late mother.

The open air funeral service was attended by the state deputy governor, Deacon Kingsley Otuaro, Senator James Manager, Hon Julius Pondi of the House of Representatives, some members of the National and State Assembly, Commissioners, Political Advisers and other top government officials.

Late Idowu Timi who died at the age of 88 was interred at her son’s premises in Patani.

AS THE NATION AWAITS THE JUDGES