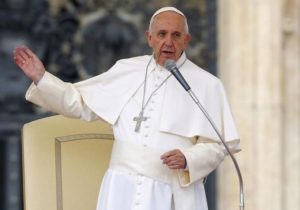 Pope Francis talks as he leads the weekly audience in Saint Peter’s Square at the Vatican. | Reuters

By Michael Gryboski, Christian Post Reporter
Pope Francis called on Christians worldwide to recite the Lord’s Prayer, also known as the Our Father, at noon Wednesday in response to the coronavirus pandemic.

The head of the Roman Catholic Church took to his official Twitter account on Tuesday morning to announce the call to prayer, asking for participation from Christians of all denominations.
“Let us stay united. I invite all Christians to direct their voices together toward Heaven, reciting the Our Father tomorrow, 25 March, at noon,” the pontiff tweeted.

The Twitter post included a short video of Francis giving a prayer that had English subtitles, calling on people to “pray together for the sick, for the people who are suffering.”

“I thank all Christians, all the men and women of goodwill who pray at this moment in unison, whichever religious tradition they belong to,” Francis said in the video.

The Conference of European Churches, an ecumenical Christian organization that received the invitation to pray at noon Wednesday via official letter, announced that they were taking part.
“During these times of global uncertainty, we need signs of unity and hope,” said the CEC in a statement released Tuesday.

“The world today calls us to be united. Not only fighting against this devastating pandemic, but also in order to support one another and to feel in communion, remembering to draw lessons from this crisis.”

The World Council of Churches has also accepted the papal invitation given to them via official letter, with WCC General Secretary, the Rev. Olav Fykse Tveit, saying that such observances “are a reminder that we are one human family.”

“As people across the globe are in their scattered working places at home, we will have the opportunity to unite our voices in praying to God with the words that our Lord Jesus Christ taught us,” he said.

In addition to Francis’ call for global recitation of the Lord’s Prayer, the World Evangelical Alliance is hosting a Global Day of Prayer & Fasting on Sunday.

WEA Secretary General Bishop Efraim Tendero said in a statement released Monday that he believed prayer was “still the greatest help that we can give.”

“As we pray for people in this difficult time, let us assure them of God’s love and care for those who are fearful,” Tendero said.

“Let’s pray especially for all the frontline medical and government workers — for protection, good health, and wisdom in all that they do. Working together with God’s help, we shall overcome COVID-19.”

My conviction: An assault on the integrity of British justice, Ibori insists