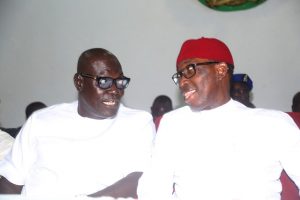 In a statement he personally endorsed, the Minority leader hailed Governor Okowa for his continued demonstration and passion to allow democratic principles and tenets thrive, by way of giving the party and its members the sole responsibility to choose who should represent them in all the offices of the party at the ward level, saying that the Governor’s gesture was a clear attestation of his love and believe in true democracy.

“I sincerely congratulate His Excellency, Senator Dr. Ifeanyi Okowa, Governor of our dear state and the leader of our party, the Peoples Democratic Party in Delta State, for a peaceful and successful conduct of the just concluded congresses across the various wards in the state. He once again, demonstrated his great desire for party unity by not in any way interfering in the choice of those elected as officers to lead the party at the various wards,” Hon. Elumelu stated.

The Minority Leader who represents Aniocha/Oshimili Federal Constituency in the House of Representatives, also congratulated and commended the Chairman of the Party in the State, Olorogun Kingsley Esiso for his role in ensuring the success of the congresses, saying that the State Chairman demonstrated immense maturity in adhering to the laid down guidelines stipulated by the National Secretariat of the party in the manner the congresses were conducted in the State.

He also appreciated the Senatorial Chairman of the Party in Delta North Senatorial District, Deacon Moses Iduh and said that his coordination of the congresses with other leaders of the party in the senatorial district was worthwhile as well as a huge boost to the peace, progress and unity of the Party

“It is my hope that the same thing will play itself in the forthcoming Local Government Areas as well as the state congresses,” he said, even as he applauded members of the Party in the State in general for their peaceful conduct throughout the period of the exercise, affirming that their role was critical to the overall successes of the congress in Delta State.